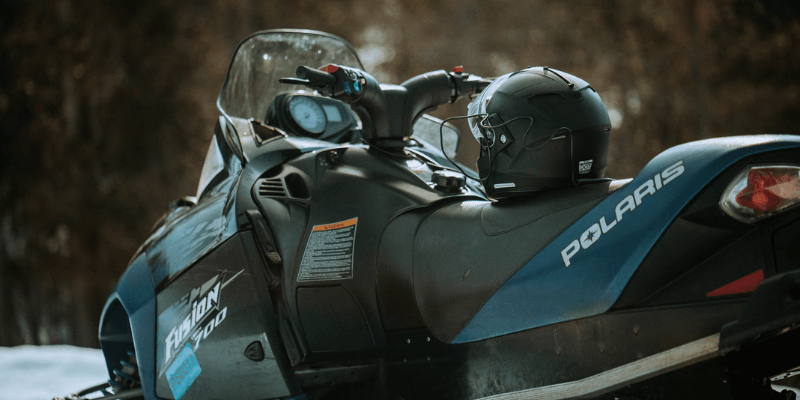 Snowmobiles are combustion engine-powered machines that slide across the snow using a spinning track that pushes it forward. Instead of wheels, these machines have skis to slide and steer on the snow.

I’m a lifelong snowmobiler, and I love everything about these amazing machines. I’ve been fascinated with all things snowmobile-related since I was a kid, and I have first-hand experience understanding how they work and operate.

This post will provide you with some basic information on how a snowmobile works. I’ll explain all of the major components that allow these machines to move across the snow and break down the mechanics of how they interact together.

From a very basic perspective, a snowmobile is a small-engine machine designed to operate on snow and ice. Most of these engines are either 2-stroke or 4-stroke styles, which are similar to engines used in other motorcraft like dirt bikes and jet skis.

The main difference between a snowmobile and other similar motorcraft is that a snowmobile doesn’t really have wheels and instead utilizes a track that spins and bites into the snow to propel it forward.

Breaking down the major components of a snowmobile will give you a better understanding of how these machines work. Then you can look at how all of these components work with one another to put the sled in motion.

The major components of a snowmobile include the engine, clutch, skis, and track. There are also minor components, which I’ll address in the following section, but these don’t affect regular operations as much.

The powerhouse of a snowmobile is its engine. This is where everything starts, and it’s essential that the engine runs for everything else to work on a sled.

The two primary types of snowmobile engines are 2-stroke and 4-stroke. This refers to the number of strokes it takes for the cylinders to fire. 2-stroke machines are lighter and require oil mixed in with the gasoline, while 4-stroke engines are heavier and have separate oil systems.

If you are curious about the mechanics, the video below will give you a better idea of the difference between these two engines.

The engine on a snowmobile is similar in function to many other types of motor vehicles, but the differences start to show up with what the engine powers. With a snowmobile, its engine connects to a track drive, which rotates the track on the snow.

This is different from a wheeled vehicle, like a car where the engine spins a drive shaft, which then puts the wheels in motion. The engine is still the powerhouse in both of these vehicles, but the engineering is pretty different as it connects to the propulsion systems.

The clutch is another major component of a snowmobile, and this part basically allows the engine and track to connect, causing the sled to move forward. Without a clutch, a running engine would cause the sled to constantly move forward or never move at all.

The clutch style of a snowmobile is known as a continuously variable transmission or CVT. Several clutches are involved with this system, and these components resemble a pulley. They are connected to a drive belt, which propels the track.

The nature of the CVT means that you don’t need to shift gears as you do with some other engines. The machine automatically adjusts torque and power based on how fast the sled is going and how much you are on the throttle.

The video below shows how a CVT works and is worth checking out if you want to learn more.

The primary clutch is located near the engine. As the engine revs up when you hit the throttle, the clutch closes through the forces of motion, and this lets the belt its attached to move and pass on the power made by the engine.

There is also a secondary clutch that helps the track start to spin. This clutch links up with the track drive and turns a set of gears that spin the track. So these two clutches work together to make the snowmobile move forward.

The snowmobile track is the part of the machine that comes in contact with the snow and physically creates motion. The track starts to spin once the engine sends power to the crankshaft and the clutches engage.

A snowmobile track looks like a miniature tank or tractor track, and it functions in the same way. The track has blades that dig into the snow as it spins, pushing snow and moving the machine forward.

Snowmobile tracks are usually made of rubber, which is strong enough to dig into the snow while still flexible enough to be tightened, loosened, or adjusted. The track needs to have proper alignment and tension to work correctly.

The skis are at the front of the snowmobile and are basically the steering system for the sled. There are two skis on either side of the snowmobile that resemble wider snow skis that you’d use for downhill skiing.

These skis are attached to the handlebars, and they will turn accordingly when you move these bars with your arms. As the skis turn, the sled will go in a different direction. The skis are also crucial for keeping the machine stable and on top of the snow.

Skis will have wear bars or carbides on their bottoms to give added traction and control in various snow conditions. These function somewhat like ice skates and cut into the ice and hard-pack snow for added control.

Now that I’ve explained the major components of how a snowmobile works let’s take a quick look at some of the minor components. Just because I call these minor doesn’t mean they are not important.

Suspension – The suspension components help add stability to a snowmobile as it moves through different terrains. Various parts help cushion your ride, so it’s not as bumpy and jarring.

Headlights/Shield – You also have headlights up front that give you the ability to see at night or in low light conditions. And there is a shield that helps deflect snow from getting into your field of view as your ride.

Throttle – The throttle is attached to the handlebars and is basically like a gas pedal on your car. This allows you to control how fast the snowmobile is going, and you slow it down by letting up on the throttle.

Seat/Rails – The seat and rails are also important minor components that help you stay comfortable and in control when you ride. A seat is often cushioned while the rails give you a place to place your feet.

All things considered, a snowmobile isn’t all that complicated. If you have a basic understanding of mechanics, the information above should provide you with a better understanding of how your sled moves across the snow.

If you are a visual person and want to see what I explained in the sections above, check out the video below.