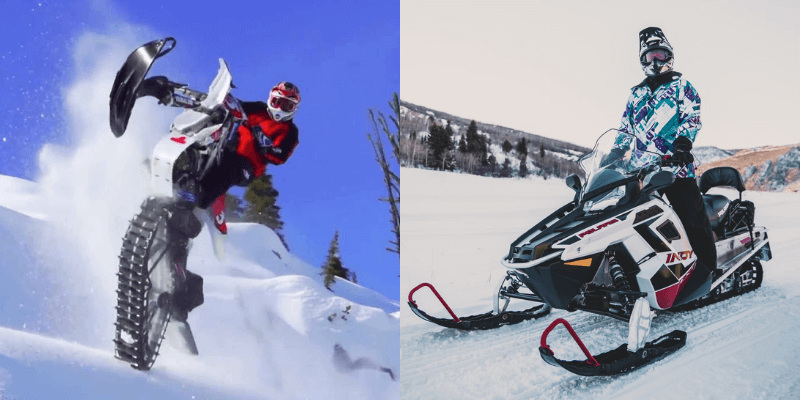 In the world of winter sports, there are always new and exciting developments. Snow bikes have been growing in popularity in recent years, and these slimmed-down snow machines make for another way to explore the trails and backcountry.

I’m an avid snowmobiler who loves playing in the snow as much as possible. I pay close attention to all things snowmobile-related, and I’ve had the chance to play around on a snow bike a few times this season.

This post will compare and contrast snow bikes and snowmobiles. I’ll explain what a snow bike is for anyone out there who doesn’t already know and help you better understand why or why not you might want to use one.

What is a Snow Bike?

First things first, I should explain what a snow bike is.

A snow bike is basically a cross between a snowmobile and a dirt bike. It’s fully intended to be used in the snow and can go nearly all of the places that a snowmobile can.

If you just looked at the upper half of a snow bike, you would think it’s a dirt bike or motorcycle. You have handlebars, a seat, and the narrow profile of a bike. But if you look at the bottom half, you would instantly recognize it as some sort of snowmobile.

However, instead of tires, a snow bike has a track in the back (like a snowmobile) that pushes through the snow to propel a rider forward. And there is a single ski up front that helps keep the machine afloat, which attaches to the handlebars to allow for steering.

What’s the Difference Between a Snow Bike and a Snowmobile?

The main difference between a snow bike and a snowmobile that you’ll see upon first look is its size. A snow bike is a lot smaller than a snowmobile. It’s narrow like a dirt bike, so the track is not as wide as an average snowmobile.

I’ll explain some other key differences between how these two machines operate and handle in the snow, but that’s the main thing that distinguishes the two. A snow bike is less than half the size of a standard snowmobile.

What is a Snow Bike Used For?

A snow bike is used for the same thing as a snowmobile – to have fun in the snow and cruise around on the trails or backcountry. It’s a recreational vehicle built more for enjoyment and adrenaline than anything else.

Snow bikes are even more focused on fun than snowmobiles because they really don’t have any other purpose. A snowmobile can haul equipment or even several riders, so it has utility use in addition to being fun.

A snow bike is too small to tow and attach extra equipment, so there is not much utility use you can get out of these machines. They are for entertainment and enjoyment, and they provide riders with a lot of both.

Let’s take a head-to-head look at snow bikes and snowmobiles to give you a better idea of how they compare and differ from one another.

As I touched on earlier, one of the primary differences between the two machines is their size. A snowmobile is much larger than a snow bike. Snow bikes weigh a lot less than snowmobiles and are also narrower.

If you were to compare the weight of a snow bike and a snowmobile, the snow bike would easily weigh less than half of the average snowmobile. And they are about half as narrow and nowhere near as long.

This means that most snow bikes can only hold a single rider. So if you want to ride in the snow tandem, you’ll want to stick with a snowmobile.

Since snow bikes are a lot smaller and narrower, they are easier to maneuver and transport. A snow bike can navigate through tighter trees and other terrain that a snowmobile might not be able to go through.

If you like to ride through backcountry forests or make tight turns, then a snow bike will give you quick response and handling. But a snowmobile will be a little more stable because it doesn’t tip over as easily as a snow bike.

The lighter weight of a snow bike also makes it easier to transport. These machines are pretty easy to get into the back of a truck or trailer, and you won’t necessarily need a ramp to make this happen.

The lighter weight of a snow bike also makes it easier to stand the bike up if you tip. If you have ever tipped a snowmobile, you know it can be a chore to flip it upright. With a snow bike, you can quickly get it upright without any assistance.

Snow bikes are a lot cheaper than snowmobiles. This makes them a better option for anyone on a budget who wants a way to enjoy the snow or venture into the backcountry. They are smaller and have less material, which helps keep the cost down.

Snow bikes are still relatively new, and that makes them less common. You have many more options in terms of models and machine styles with a snowmobile than you do with a snow bike.

Many snow bikes come in kits that you need to assemble for yourself, which means you’ll need to be comfortable with DIY skills if you want an operations snow bike. Look for this to change as the bikes get more popular, but you just don’t have as many options for now.

In terms of required maintenance and upkeep, snowmobiles and snow bikes are pretty similar. If you have been snowmobiling for a while and understand how a small engine works, you will easily be able to keep a snow bike in good condition.

Snow bikes are smaller with fewer parts, so the overall maintenance costs will likely be cheaper than a snowmobile. This obviously depends on how hard you ride and how good of shape you keep your machine in.

Safety needs to always be a top consideration no matter what sort of snowmachine you are riding. Both snow bikes and snowmobiles can be dangerous, and everyone needs to wear a helmet when riding.

The higher the speeds and the more complicated maneuvers you make, the more dangerous riding gets. I don’t think that snow biking is any more dangerous than snowmobiling, but you need to understand the risks involved and limit the chance of accidents.

Avalanche safety is essential whenever you are in the backcountry, whether you are snow biking, snowmobiling, skiing, or doing any other winter activity.

The video below has some good avalanche safety tips for snowmobilers, which will also apply to anyone on a snow bike.

I highly recommend getting on a snow bike if you have the chance. They are a ton of fun and will bring a smile to every snowmobiler’s face. I don’t think these machines will replace snowmobiles, but they will get more popular and available in the coming years.