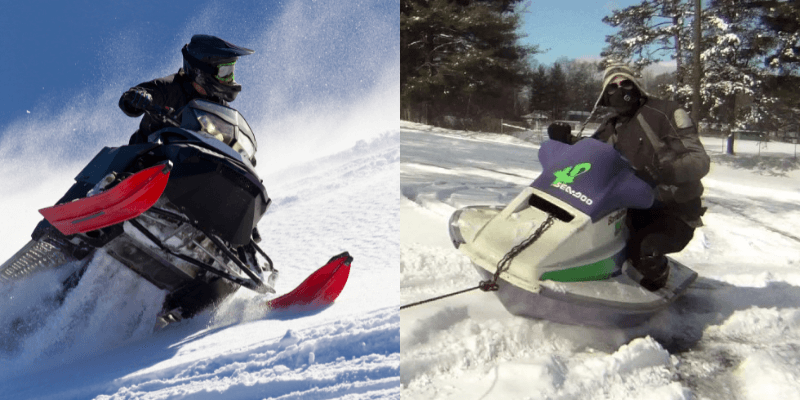 Jets skis and snowmobiles have one big thing in common – they are both extremely fun. If you want to enjoy your time in the snow or water, there aren’t too many better ways than getting on these amazing machines.

I’ve been snowmobiling for most of my life and am also a big fan of most motorsports. I have years of experience in the snow, and I’ve also spent plenty of time on jet skis. I know a lot about these machines and want to share that with you here.

This post will serve as a comparison between snowmobiles and jet skis. I’ll show you all the ways they are similar and also how they are different. Whether you are experienced with both machines or just looking to learn more, this information will help you out.

While there are a lot of similarities between snowmobiles and jet skis, there is also one significant difference that I want to touch on first.

Some people choose their recreational activities based on the season and will snowmobile all winter long and then start jet skiing in the summer when there isn’t any snow.

But other people prefer one of these activities over the other because they might dislike cold weather or they might not like getting on the water.

Regardless of where you stand concerning which of these forms of motorsport you like better, I can assure you they are worth exploring. I enjoy snowmobiling better, but I grew up in the mountains and didn’t jet ski until later in life.

I know other people who grew up jet skiing and dislike the snow and cold. So there are definitely snowmobile people and jet ski people out there.

Let’s look at some of the main differences and similarities between snowmobiles and jet skis here. I’ll break things down into several categories to give you an idea of how the two machines compare to one another.

Technically, snowmobiles are intended to be ridden on the snow, and jet skis are designed for use on the water. This holds up as a fact most of the time. But if you have ever heard of a water cross or water skipping, you’ve seen a snowmobile used on water.

Snowmobiles can cover all kinds of terrain, as long as there is snow on the ground. This includes mountains, frozen lakes and rivers, forests, and just about any other type of topography you can imagine.

Jet skis will only work on water. You can’t take a jet ski on the snow even if you want to. But you can ride it on just about any body of water. This includes lakes, rivers, the ocean, and I’ve even seen people use them in large pools.

Jet skis and snowmobiles use similar engines, although they have different means of propulsion. Both of these machines will typically have a 2-stroke or 4-stroke engine that serves as the basis for movement.

Jet skis use what’s called an impeller to generate thrust. The engine turns the drive shaft which sucks in water from below the machine and shoots it out the back. This creates enough power to propel it forward on the water.

Snowmobiles have a track that spins to push the machine forward through the snow. The engine turns the components that the track sits on, which creates enough power to keep it moving forward.

The controls of a jet ski and snowmobile are also very similar. The basics consist of handlebars and a throttle. You steer by turning the handlebars, and you speed up or slow down by opening or releasing the throttle.

Like any motorized vehicle, there is a pretty wide range of prices in jet skis and snowmobiles. In my experience, snowmobiles are a bit more expensive than jet skis, but they can also have similar price points, depending on what model you want to get.

Maintenance costs are also pretty similar, and you always want to make sure that you keep your machine in good operating condition to help it last a long time. This can include engine maintenance and upgrades during regular use.

Both snowmobiling and jet skiing can be dangerous, so you always need to keep safety in mind when riding on either machine.

When snowmobiling, you will want to wear protective gear such as a helmet and body armor. You also need to know avalanche safety if you are riding in the backcountry.

Most jet skiers don’t wear helmets, although it’s not a bad idea at all to do so. You don’t need as much safety equipment, but you should also wear a life vest in case you get separated from the machine in the water and need to swim.

Always exercise caution and ride within your limits and abilities, no matter which of these motorsports you are pursuing.

Here are a few of the most commonly asked questions relating to snowmobiles versus jet skis.

Snowmobile vs Jet Ski: Which One is Faster?

Snowmobiles are faster than jet skis. This is true for almost all land versus watercraft because there is less drag and resistance on the ground than in water. The fastest water skis will top out around 75mph, while the fastest snowmobiles can go considerably faster.

Is Snowmobiling or Jet Skiing Bad for the Environment?

Snowmobile and jet skiing can be bad for the environment. This is especially true if the machines use a 2-stroke engine because these have higher emissions than 4-stroke models. But there are some emissions with any type of internal combustion engine.

Do Jet Skis Run on Gas?

Snowmobiling and jet skiing offer similar enjoyment and entertainment for riders, and I’ve had highly memorable days on both. If you have the chance to try either of these out, I highly recommend making the most of your time in the snow or water!