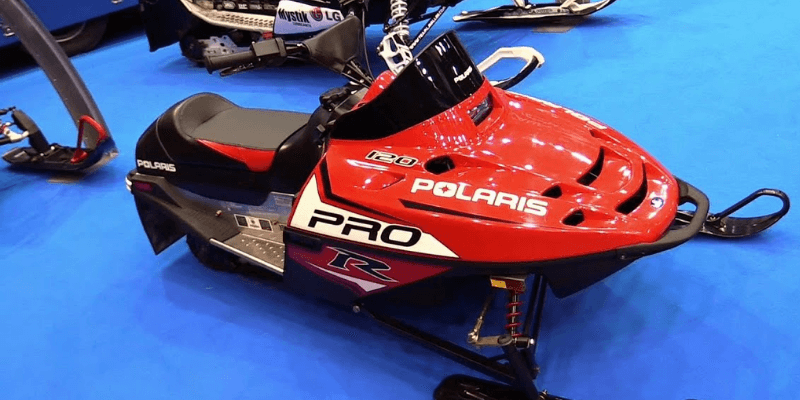 A 120 snowmobile is a very small sled that is typically intended to be used for children. They are too small for most adults but are ideal for kids because they don’t have as much power as the average larger machine.

I’m Chaz, and I created this blog to provide information and advice on all things snowmobile-related. I have years of experience in the snow, including riding a 120 snowmobile when I was a kid.

I’ll explain 120 snowmobiles in this post. I’ll provide you with information on how these machines differ from other sleds and why or why not you might want to use one. They are somewhat of a novelty but can be fun if you have kids who want to ride.

A 120 snowmobile is a 120cc 4-stroke engine if you want to get into specifics. If you know anything about snowmobiles, this is a considerably smaller engine size than the standard 600cc or 800cc engine.

And these snowmobiles don’t just have smaller engines – they are much smaller in size as well. They sort of look like toys, even though they have all of the major components of a snowmobile over twice their size.

120 snowmobiles were designed with smaller riders and particular kids in mind. These sleds are much easier to control and handle than larger machines, which also means they can be a lot safer for children to learn how to ride on.

Quick History of the 120 Snowmobile

Even though they might not be as popular as standard-sized snowmobiles, 120s have been around for quite a while. I remember riding one when I was a kid. It wasn’t the first sled I operated, but it was pint-sized, giving my friends and me a great time in the snow.

These machines first became widely available in the 1990s. The Ski-Doo model was the first one I ever rode, but both Polaris and Yamaha put out 120 models around the same time. They have been around ever since and are still fairly popular.

Today, there are some pretty awesome 120 snowmobiles out there. If you want to get your kids started young, these make a great way to teach them how to handle a sled without as many risks as having them operate a full-sized machine.

How 120 Snowmobiles Compare to Other Machines

As I mentioned earlier, 120 snowmobiles are much smaller than the average-sized sled. This is the most noticeable difference, and it’s very easy to spot one of them on the trail by the pint-sized profile they make.

If you compare a 120 snowmobile to standard sleds in the 600cc or 800cc size, the engine capacity is significantly smaller. A 120, therefore, will not have as much power, speed, or torque as a larger sled. It’s not capable of reaching speeds anywhere near larger models.

But that lack of power and torque can be a good thing for riders learning the basics. 120 snowmobiles are much easier to control, and there is less risk of accidents occurring because they can’t be driven as fast.

The overall size of a 120 snowmobile is also a lot smaller than regular sleds. They seem to be about half the size or less of a standard sled on appearances alone. That’s why some people also refer to these as ‘toy snowmobiles.’

Most 120 snowmobiles are right around six feet long, which is about half as long as a regular sled. They also aren’t as tall or wide, although the difference in width is not as drastic as the difference in length.

Being so much smaller also means that 120 snowmobiles weigh a lot less than full size machines. This is another reason why they can be ideal for children, and the lighter weight makes them easier to handle for lighter riders.

Besides the size and power differences, 120 snowmobiles are built and designed nearly the same way as larger sleds. They have the same basic parts and components and require the same regular maintenance to keep them operational.

The repairs and maintenance costs might be a bit cheaper, but you still need to maintain the machine for reliable performance.

The initial cost of a 120 snowmobile is considerably less than a larger sled. This is good news for any budget-minded parent, but that still doesn’t mean they are cheap. A brand new 120 snowmobile will still cost you several thousand dollars.

Who are 120 Snowmobiles For?

120 snowmobiles are basically only designed for children. A smaller adult might be able to ride one theoretically, but a full-sized adult would have trouble staying comfortable and safely controlling the machine.

In my experience, 120s are suitable for kids in the 6-12 age range. If kids stay small, they can work when they get over 12. But I think it’s good to transition to a larger machine once the rider has the experience and know-how to handle it.

If you have ever ridden on a mini-bike or mini-motorcycle, the experience is similar to riding a 120 snowmobile. Kids will have a great experience with them, but adults should only ride them as a novelty.

120 snowmobiles are small machines that are built for youth riders. They are a great way to get kids started with riding and can be much safer than letting them rip on a full-sized sled before they are ready.