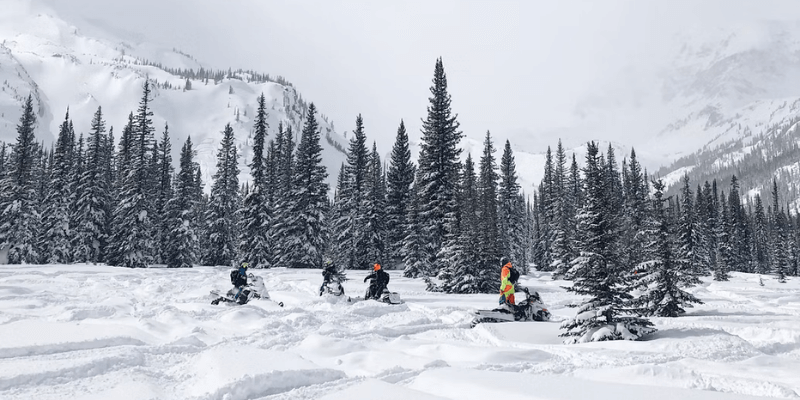 Every season, snowmobile performance seems to improve. The debate between whether a 600cc or 800cc snowmobile is better falls right in line with performance, reliability, and power. But there isn’t always an easy answer, and every rider has their own opinion.

I’ve been an avid snowmobiler for most of my life. I’ve used many different 600 and 800 sleds over the years, and I understand the difference between the two. I know through first-hand experience how they perform in the snow.

In this post, I’ll compare and contrast 600 vs 800 engines and how they affect snowmobile performance. This is good information for every rider to know and can help you decide which model to get if you are making a new purchase any time soon.

Time to fire up the engines and get rolling.

If you are new to the world of snowmobiles or haven’t been riding for a while, you are probably wondering what a 600 or 800 snowmobile even means. I want to clear this up quickly before diving into the differences between the two.

You’ll also see these numbers listed as 600cc or 800cc. “CC” stands for cubic centimeters but is also called cubic capacity or cylinder capacity. It’s a measurement of how much capacity there is in the engine’s cylinders and plays an impact on power, torque, and performance.

There are more engines with various cubic capacities other than these, but 600 and 800 seem to be two of the most popular and standard sizes. You will also see 700 engines and sizes higher than 800 as well.

600 vs 800 Snowmobile: Similarities and Differences

Let’s dive deeper into the differences and similarities between 600 and 800 snowmobiles.

Aside from technical specifications, power and performance are probably where you’ll see the most significant difference between 600 and 800 snowmobiles. 800 snowmobiles have more power and torque, which many riders prefer.

The extra power generated from an 800 engine can give you higher top speeds, which can be good for cross-country trips. It can also help you get going on steep slopes or navigate through terrain where that added torque is useful.

But that added power can also be too much for some riders, and a 600 will have a more relaxed and user-friendly feel. The smaller capacity engine can be better for beginners or inexperienced riders who don’t need super high performance.

600 sleds tend to be lighter than 800 sleds. This can come in useful if you want extra maneuverability when you are blasting through trees or navigating tight terrain where added weight might limit what you can do.

Lighter snowmobiles can also be better for lighter riders, so these can be a good choice for kids or small people who want a machine that they can handle easier. It’s not a drastic difference, but it can be a preference.

Weight can also play a role in getting a snowmobile stuck or unstuck in the snow. Most people will say that a lighter sled won’t get stuck as often. I’ve got both sizes stuck many times, so I don’t think weight matters all that much.

If you hang around with snowmobilers, you’ll hear them say that 600s are more reliable than 800s. While this used to be true when the 800s were first developed, I don’t think it holds for more modern machines.

In my experience, as long as you get a high-quality model and keep it well maintained, both sizes of engines can be really reliable. There isn’t a drastic difference between the two in terms of which will last longer or have fewer breakdowns.

The cost of a snowmobile is a big consideration for most people. And this is one area where there can be a significant difference between 600 and 800 snowmobiles.

800s are almost always more expensive than 600s. This cost difference can easily be $1,000 or more, so it’s not an insignificant sum. If you are on a budget, then an 800 snowmobile might be out of reach, even if you want to have the extra power.

Is this extra cost worth it? Well, that depends who you ask. If money is your biggest concern, I don’t think there are any issues with getting a 600 sled. You aren’t going to notice a huge difference unless you are a very experienced rider.

On the other hand, if money isn’t a concern and you want the most bang for your buck, I’d say go ahead and get an 800, so you can have the extra torque and power. You might as well go a little bigger and see what it can do.

While there are obvious differences in cylinder size between 600 and 800 snowmobiles, many of the other differences between the two are debatable. To decide between the two, you will want to consider power, cost, and any personal preferences you might have.

If you look through popular snowmobile forums, you’ll see this debate pop up in all of them. And you’ll see many different answers as to why one size might be better than the other. If you want more information, take some time to look through it and make an educated decision.