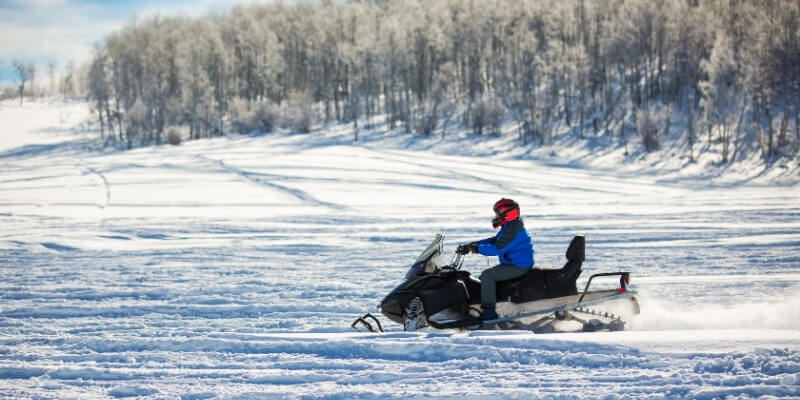 While the current world record for a snowmobile is 172.2 mph (277.13 km/h), the average unmodified sled has a top speed far under this. Most high-performance sleds with decent power can reach speeds of 90-110 mph.

My name is Chaz, and I’m a snowmobile junkie. I love all winter sports and spend my time in the snow cruising trails on my sled, chasing powder on my skis, or both.

I’ve owned a few really fast sleds over the years, and although I don’t like to push top speeds all the time, I know plenty of speed demons who do.

In this article, I’ll dive into some of the different factors that dictate how fast a certain sled can go alongside some safety considerations to keep in mind if you want to hit the throttle.

Hang on tight, and let’s get cruising!

Going fast on a snowmobile can be a thrill. It can also be extremely dangerous. If you want to push the limits of what your sled can do in terms of top speed, you always need to keep safety in mind.

Always make sure you have a wide-open stretch of packed snow without obstacles or other riders. If you want to attempt top speed, limiting your turning and staying on consistent terrain is crucial.

The faster you go, the slower you can react to anything that gets in the way. That’s why you need to make sure your path is free of any obstacles that could cause you to turn suddenly, resulting in an accident.

The Guinness World Record for top snowmobile speed is 172.2 mph, set by Chris Hansen on a lake in Canada in 2004. There are many other unofficial claims of speeds faster than this, but they are hard to verify – so I’m in the camp that the official record is accurate.

NADA claims that a G-Force-One rider hit a speed of 320 miles per hour, but this is hard to find proof of and almost certainly involved using a sled that was heavily modified to barely resemble a modern snowmobile – if it happened at all.

A high-performance currently available snowmobile, such as the Yamaha Sidewinder, has a top speed of 119/mph, which is the fastest you are likely to see in a stock machine directly off the factory floor.

Even if you try to reach top speed on a high-performance sled, you’re going to need perfect conditions to get there. And that brings us to the next section of this article.

Factors that Affect How Fast a Snowmobile Can Go

The most significant factor that affects how fast any snowmobile can go is its engine. The amount of power an engine has is typically shown in terms of horsepower. Similar to a car, the higher the horsepower, the faster the snowmobile.

Let’s look at the Yamaha Sidewinder again to show how horsepower affects speed. This snowmobile has a 998cc turbocharged engine that has a 200 horsepower rating. That is a monster rating for a snowmobile and is why this sled hauls.

But just because your snowmobile has the horsepower to hit those top speeds doesn’t mean it’s always possible. Other factors affect how fast it can go on any given day.

Snow conditions play a role here. You aren’t going to be able to go as fast in deep powder conditions as you could on hardpack or ice.

Wind-resistance and general aerodynamics come into play as well. If you try to reach top speed in a blizzard-like headwind or crosswind, you have no chance. But if that wind is at your back, you might even break a record.

Weight also affects a snowmobile’s speed. A rider who weighs 250 pounds won’t go as fast on the same sled as a rider who weighs 150 pounds. If you have extra gear or accessories on your machine, this can weigh things down as well.

Here are some of the top questions other riders have regarding how fast a snowmobile can go.

What is the average speed of a snowmobile?

The average top speed of a modern snowmobile is anywhere from 90-100 mph. It’s hard to give an exact average because many different factors come into play, from engine size to rider weight to riding conditions.

How fast can a snowmobile accelerate?

Most sleds can go from 0 to 60 mph in 4 to 6 seconds. That’s pretty fast compared to a car, and if you’ve ever hit the throttle on a sled under good conditions, you know how fun it can feel! The world record for 0 to 60 mph is right around 1 second.

How fast is the fastest stock snowmobile?

The fastest stock snowmobile that I’m aware of is the Yamaha Sidewinder mentioned earlier in this article. It has a nearly 1000cc engine that can boost the top speed to 119 mph. That’s faster than most people have ever gone.

How fast does a 440 snowmobile go?

A snowmobile with a 440cc engine, such as the Polaris IQ, has a top speed of around 75 mph. For the average rider, this is more than enough speed and engine size that will keep you safe and in control.

Most of us will never reach anywhere near world record speeds on a snowmobile. For me, that’s totally fine. While I love to go fast, I would very much like to continue to enjoy riding until I’m an old man and not risk my life going several hundred miles an hour.

My personal best on a snowmobile is 90 mph, and I’ll be honest – I was terrified. If you desire to push the limits, please do it safely, so you don’t risk your life or anybody else out there on the trails.

How fast have you gone on a snowmobile? What type of sled were you riding? Let us know in the comments below! 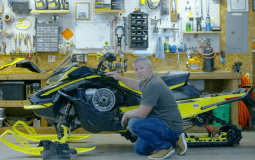 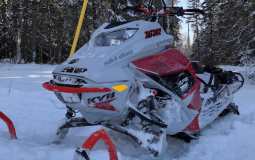 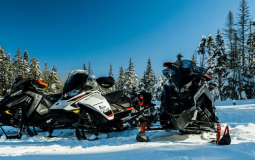 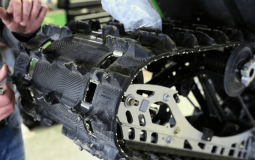 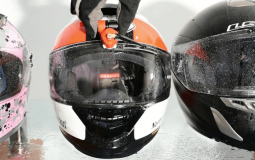 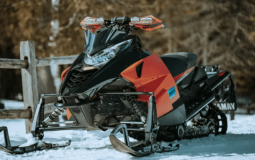 2-Stroke vs 4-Stroke Snowmobile: The Differences 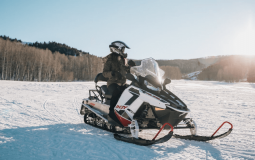 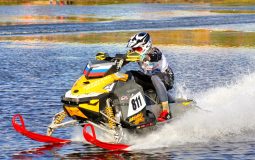 Snowmobile on Water (Watercross): All You Want to Know