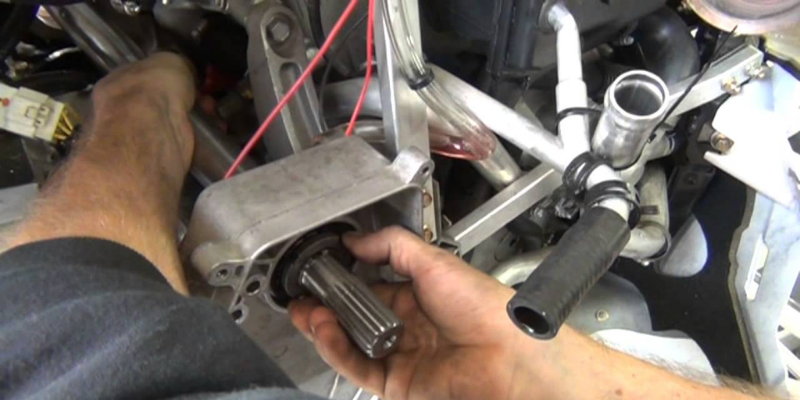 The jackshaft is a long metal rod or shaft that plays an integral part in the function of a snowmobile. This part takes power generated by the clutch and transfers it to the chaincase. It’s a critical piece of the drive train that helps propel the sled on the snow.

I’ve been snowmobiling since I was a kid, and I love everything about these amazing machines. I’ve driven, repaired, and observed many different snowmobiles over the years, and I have first-hand experience with how they work.

This post will explain what a jackshaft is on a snowmobile. I’ll show you why it is such a critical component and provide some other helpful information to give you a better understanding of how the jackshaft works with the other parts of the sled.

Nearly every motorized vehicle has one or more shafts that help turn the power generated from the engine into motion. A snowmobile actually has three of these shafts – a crankshaft, a jackshaft, and a driveshaft.

The jackshaft is the middle rod in this chain, and it serves a very important role. It connects between the secondary clutch and the chaincase, effectively transferring power between these two critical components.

As the clutch turns through power generated by the engine and then the crankshaft, this causes the jackshaft to spin. The other end of the jackshaft is connected to the chain drive gear in the gear case.

As the jackshaft spins, it causes the chain drive gear to rotate. This turns the chain which then works to make the track spin.

All of these moving parts work together to make a snowmobile go. While they all serve a slightly different function, they are all part of an integrated system. One part of this system won’t work without the others, so they all need to function for the snowmobile to work.

In addition to transferring power from the clutch to the chaincase, the jackshaft also plays a role in regulating the sled’s speed, and its bearings can play a role in how noisy the machine is when in operation.

A jackshaft is a metal rod that is long, skinny, and cylindrical. It has bearings and teeth on either end, which allow it to stay in place and spin while also connecting to the gears that it drives when in motion.

The jackshaft is longer than the crankshaft but typically a little shorter than the driveshaft. The exact size of these will vary from machine to machine, so I won’t get into any specifics here.

It’s not really that complex of a part, but it is very important. It needs to be solid and sturdy to make sure it can handle the constant movement and forces involved with spinning and torque.

Jackshafts on other machines that aren’t snowmobiles will look similar. Each vehicle, and each model of that vehicle, will have its own particular jackshaft size. So you can’t mix and match jackshafts most of the time.

While the jackshaft on your snowmobile doesn’t require constant care, you need to keep an eye on it to make sure it’s greased up and operating correctly. If the bearings run out or run low on grease, this can cause a lot of damage to the other components in the drivetrain.

The bearings on either end of the jackshaft are the shaft parts that need to be greased for standard operation. To take the jackshaft out and grease these, you need to remove the clutch and the chaincase cover.

This is not the easiest maintenance task, but it’s also not that difficult if you have experience working on your snowmobile. Just make sure to drain the oil from the chaincase before removing the cover, or you will have a big mess on your hands.

Some people will replace their bearings instead of simply lubricating them. This is a good idea if your snowmobile has seen a lot of time on the trails or if you want to upgrade to a better option than what came stock.

Replacing the entire bearing is more complicated than we’ll get into here, but it’s doable if you have all the parts and tools needed to do the job. Just be sure to install the jackshaft correctly once you have them replaced.

Every snowmobile model will have a slightly different method for removing the jackshaft and lubricating or replacing the bearings. If you don’t know what you are doing, I don’t recommend trying this job yourself.

Jackshaft lubrication should be a part of your standard maintenance, and you should check on the bearings about once a season. If you hear high-pitched whines or are familiar with the sound of bad bearings, this is a good indicator that they need to be replaced.

Here are a few short answers to some of the most common questions about the jackshaft on a snowmobile.

Where is the jack shaft on a snowmobile?

The jackshaft on a snowmobile is located in between the secondary clutch and the chaincase. It’s a bar that sits between these two critical components and transfers power generated by the engine between them.

What is a jackshaft bearing on a snowmobile?

A jackshaft bearing is found on either end of the jackshaft, and these allow the shaft to spin without added friction or wear. These bearings can wear down or get degraded after heavy use, so may need to be replaced from time to time.

How to remove jackshaft from snowmobile?

To remove the jackshaft from a snowmobile, you’ll need to drain the chaincase and take the cover off to access the end of the shaft. From there, you’ll disconnect a bold holding it in place while also removing the other end from the secondary clutch.

The jackshaft is a critical component of the drivetrain on your snowmobile. It connects between the secondary clutch and the chain drive gear in the chaincase, transferring power between these two parts.

Jackshaft maintenance involves lubrication and bearing replacement when needed. You want to make sure the shaft is greased, so it doesn’t cause damage to other pieces of the drive train.