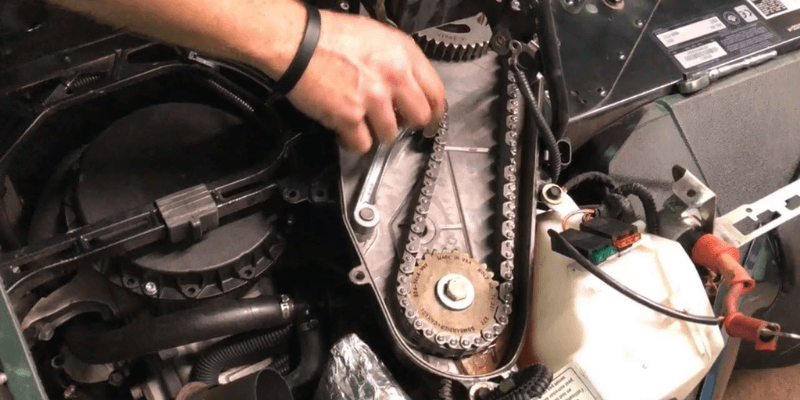 A chaincase on a snowmobile is an integral part of the drive system that helps move the snowmobile forward. It holds the sprockets and chain that take power from the transmission and, in turn, makes the track move.

I’m an avid snowmobile enthusiast with years of experience in the snow. I’ve spent many days repairing, maintaining, and rebuilding snowmobiles, and I’m very familiar with all of the working parts that make these machines operate.

This post will help explain what a chaincase is and what it does on a snowmobile. This is a critical component of the machine and plays an essential role in helping the track spin, making it move.

What a Chaincase Does on a Snowmobile

The chaincase is an essential component of a snowmobile drivetrain that helps transfer the power generated by the engine to the track. It is made up of several parts that work together with the other parts of the machine to create movement.

The chaincase also serves as a gear reduction system that helps prevent the snowmobile’s track from spinning as fast as the engine does. This is similar in function to other types of chain and gear systems, such as on a dirt bike.

The chaincase sits in between the transmission and the track on a snowmobile. It is connected to both of these components through a series of shafts, gears, and chains.

The secondary clutch connects to the drive gear in the chaincase, which spins a chain that turns another gear within the case. This power is then transferred to the main gear in the track, which drives the track over the idler wheels and moves the machine forward.

The Parts of a Chaincase

There are several main components of a chaincase, and it’s good to know what these are in case you need to make repairs or get parts replaced.

Within the chaincase, you will find two drive gears, a chain, and a handful of other seals and bearings that help the gears spin and the chain stay in place. These parts are all contained inside the chaincase, which can be removed.

For the chaincase to function correctly, it needs to be oiled. That’s part of the reason why this component is a closed system – so the oil stays surrounding the critical components to protect and lubricate them during standard operations.

And just like any other oil on a machine, it needs to be changed from time to time. The oil can wear out and degrade, making it less likely to provide the necessary lubrication and protection to keep all of the parts in good working order.

Chaincase oil changes should be a part of standard maintenance, and you need to make sure fresh oil is in there every so often. I typically do this once a year, but you might want to do it more often if you ride a lot.

Here are some of the most frequently asked questions relating to a chaincase on a snowmobile.

How often should you change chaincase oil snowmobile?

Chaincase oil should be changed once every year as part of a regular maintenance plan. Depending on when I’m doing my other maintenance tasks, I typically change my chaincase oil right after the winter riding season ends or right before it starts.

What is chain case oil used for?

Chaincase oil helps provide proper lubrication and protection for the chains and gears inside the chaincase. Without oil, these parts can wear down quickly or cease up, leading to larger issues that can easily be prevented by using oil.

What kind of oil do you put in a snowmobile chaincase?

Check the manufacturer’s specifications first to see if there are recommended chaincase oils. But most ATF Dex types of oils will help keep everything in the chaincase properly protected and lubricated.

The chaincase is a crucial component of your snowmobile, and it needs to be maintained to keep everything working properly. Make sure you change the oil in your chaincase at least once a year during regular use.

Knowing how to perform minor maintenance tasks, such as changing chaincase oil, can help save you money and teach you more about how your sled operates. I highly recommend learning all you can about the mechanics of your machine.