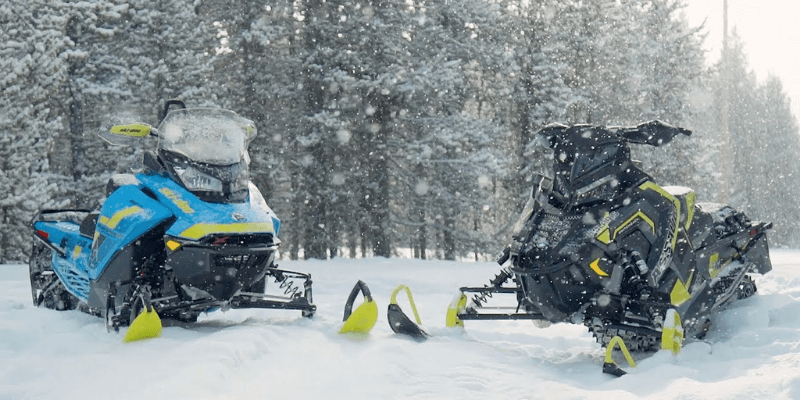 Crossover snowmobiles are versatile machines that allow you to ride in a range of different terrains and situations. They are capable of handling well on trails and in backcountry situations, giving you the ability to explore anywhere you want to go.

I’m an avid snowmobiler who has loved these incredible machines since I was a kid. I’ve ridden nearly every style of machine and have first-hand experience with crossovers. I know the performance traits and intended use of these well.

This post will explain what a crossover snowmobile is. I’ll highlight what makes this style of sled different from others and point out some reasons why or why not this might be a good option for you to choose.

A crossover snowmobile is designed to be extremely versatile. As the name implies, these machines are capable of crossing over between many different terrains and situations and are built with certain features and capabilities that allow for this.

Certain types of snowmobiles are intended for a more singular purpose. Racing machines are designed to go as fast as possible and handle well. Touring machines are made for trails and have added comfort and cargo capacity.

On the other hand, crossover snowmobiles are not designed with one purpose in mind. They are designed with many. This means that they can go just about anywhere while giving you decent performance along the way.

The main area where crossover snowmobiles, well, crossover, is when it comes to bouncing between the trails and the backcountry. This style of sled will let you stick to established routes or blaze your own, and that’s why many people like them.

Let’s dive into the details in this section and explore what makes a crossover snowmobile different from other types of sleds.

The track size of a crossover snowmobile will be a little longer than backcountry or mountain sleds but not quite as long as touring sleds. This gives you the best of both worlds regarding what it can do and where it can go.

A longer track is more stable but can make maneuvering in tight situations more challenging. A shorter track is more maneuverable but won’t be as stable. The somewhat long but not too long track on a crossover gives you both stability and excellent handling.

Suspension is another area where crossover snowmobiles have a unique design. A lot of them feature adjustable suspensions that you can set up to match the conditions you will be riding in on any given day.

You can crank up the suspension if you want extra impact absorption to bomb off cornices or ride tough. And if you’re going to cruise trails or even groomed stuff, you can soften up a bit, so the ride isn’t as bumpy.

Many other types of snowmobiles don’t allow for this, and you are stuck with whatever suspension feel is currently installed. You can always change the suspension, but you can’t always adjust it.

Like with suspension, the riding position on a crossover is also easy to tweak. You can change your position based on how you like to ride or what terrain you are currently riding. The sled design allows for this to happen without affecting performance much.

This is another design feature that comes into play when you are riding on the trail versus off-trail. When you are cruising on trails, you will probably want a comfortable riding position closer to the front of the sled.

But when you dive into backcountry situations and need to stay afloat to keep balance, you can change your riding position to a more setback stance. This will help the front of the sled remain on top of the snow and give you a little extra traction in deep powder.

The features and characteristics described above are the main ways a crossover snowmobile is different from other styles. But just like with other styles, you can get a crossover sled equipped with all sorts of other features to meet your needs or preferences.

Crossovers are available with various engines and sizes. You can get a 2-stroke option with a ton of torque if you want added pop, or you can get a 4-stroke if you want some added reliability for long hauls.

Customization is also possible with other components, and there are plenty of different crossover models out there to choose from.

Crossover snowmobiles are not for everyone despite their versatile use and all-around capabilities. These sleds don’t have a true focus or specialty, which is a big downside for many experienced riders.

In my opinion, crossovers are better for the average rider who wants to explore and hasn’t been riding for that long. They aren’t a great option for hardcore sledders looking for top-notch performance in specific situations.

Crossover sleds are cool because of their versatility, but they aren’t my favorite style. I like something with a little more focus that will give you exceptional performance in a certain situation.

But if you want to be able to ride a little bit of everything and don’t want to consider getting multiple machines, a crossover snowmobile might be the perfect option.