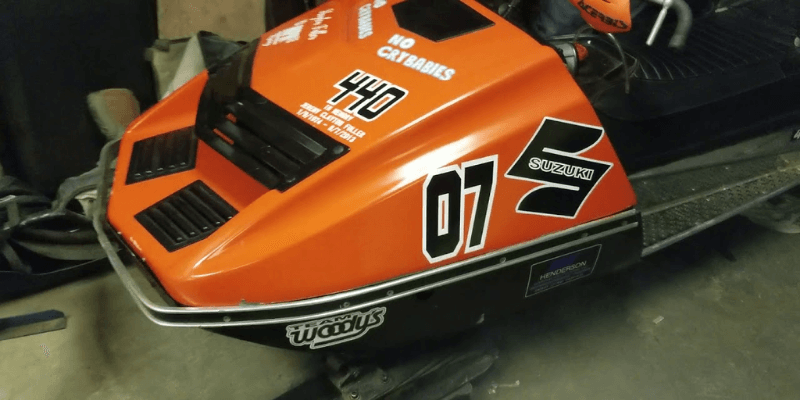 Suzuki is a well-known brand for making motorcycles and automobiles, but it also made snowmobiles for a while in the 1970s. These machines never gained that much popularity, but they were reliable, dependable, and a whole lot of fun to ride.

I love everything about snowmobiling, which includes learning about the history of these fantastic machines. I always like to deep dive into the different brands that don’t exist any longer, and I’ve done some research to come up with the information found here.

This post will explore the Suzuki snowmobiles. I’ll provide you with a quick history of the brand and its run of snowmobiles that came out in the 1970s. I’ll also answer some common questions about Suzuki that I’ve heard from many riders.

When Did Suzuki Make Snowmobiles?

This section will highlight some of the most popular Suzuki snowmobile models. I’ll provide some key information on these models, and I’ll also give you a list of all the other models that the brand put out when it was around.

The 1971 Nomad 360 was one of the first models that Suzuki released. The brand tried to market this model as a stronger-than-the-competition type of sled and designed it to be dependable and reliable for long-term use.

The Nomad 360 had unique features like a Mikuni float bowl carb and an external fuel pump. It also had a large fan-cooling system to help fight vapor lock issues that were common with machines during those years.

The 1975 Fury was another reliable machine that the company put out after a few solid years of production. This became one of the most well-known models that the brand put out and arguably one of the most sought-after vintage Suzukis today.

The Fury featured a 432cc free-air twin engine. It put out decent power and was engineered to be Suzuki’s take on a performance snowmobile. This model also had several features, like a dual exhaust that helped it put out more horsepower than other similar sleds of the time.

The Fury also had a slide rail suspension and comfortable seat, making it easy to ride and appealing to a wide range of riders. Disc brakes and a well-designed windshield were also a part of the Fury and helped it stand out from the competition.

Suzuki didn’t make that many models compared to other snowmobile brands. In addition to the Fury and Nomad mentioned above, the other Suzuki snowmobile models include:

When Did Suzuki Stop Making Snowmobiles?

Suzuki stopped making complete snowmobiles in 1976. So the brand only had about a five-year run of production. Still, they put out about 3,500 Fury models in 1975, which isn’t huge but still pretty considerable.

Why Did Suzuki Stop Making Snowmobiles?

There were several factors that resulted in the end of Suzuki snowmobiles, but the main one is that these machines just weren’t that popular. There was a lot of competition with other brands in the early 1970s, and Suzuki couldn’t compete.

Even though Suzuki sleds were built to be reliable and dependable, they really didn’t look that great. They had a boxy design that made them look like an old-school computer on skis. The bland grey color didn’t help much either.

When Suzuki realized that its branded machines weren’t gaining much traction in the industry, it came up with a pretty ingenious plan to change course. It changed focus rather than simply giving up and going back to motorcycles and automobiles exclusively.

Suzuki also got lucky when Arctic Cat decided to use its engines instead of the competitors in 1975. This was big news at the time, and it caused somewhat of a stir in the industry. The fact that Suzuki wasn’t making sleds but still making engines was a big deal.

The partnership between Arctic Cat and Suzuki ended up being more than solid. Arctic Cat gained a valuable engine manufacturer when it came to providing performance engines that riders could rely on.

Suzuki was able to escape the market with its dying snowmobile brand but still profit off the snowmobile industry by featuring its engines in one of the biggest name brands in the game for years to come.

This is an excellent example of the cross-pollination that has occurred within the snowmobile industry over the years. Just because a brand stops making machines doesn’t mean it is entirely out of the industry.

Suzuki Snowmobiles For Sale: Where to Look

Finding a Suzuki snowmobile can be pretty challenging with only five years of production and a small number of models ever circulated. This doesn’t mean that it is impossible. You just need to know where to look and also get lucky along the way.

The best way to track down a Suzuki sled is to search wide and far through the popular snowmobile forums. Vintage Sleds is a good option that has a classified section for older machines, but you should also look at all the others.

Look through the various pages on these forums and see if you can find any threads talking about Suzuki snowmobiles. Reach out to other members and see if they can point you to any Suzukis for sale.

Another option is to look through resale and auction sites like eBay and Craigslist. You might get lucky, and one will turn up in your local area. You can also ask around your local snowmobile community to see if there are any leads there to explore.

Suzuki Snowmobile Parts: Where to Look

This is an instance where Suzuki snowmobile parts might be easier to find than the sleds themselves. Suzuki is still a brand, so they still make and manufacture various products. You can use this to your advantage when looking for parts.

Suzuki Partshouse is a good site if you are looking for parts for a Suzuki engine in an Arctic Cat machine, but you might not be able to get older model parts here.

eBay is another good online option, and you can simply conduct a search with the part you are looking for or the make and model of your machine.

If you have access to a snowmobile repair or small engine shop, that’s another area to explore. The more people you ask for parts, the better you’ll be able to narrow down your search.