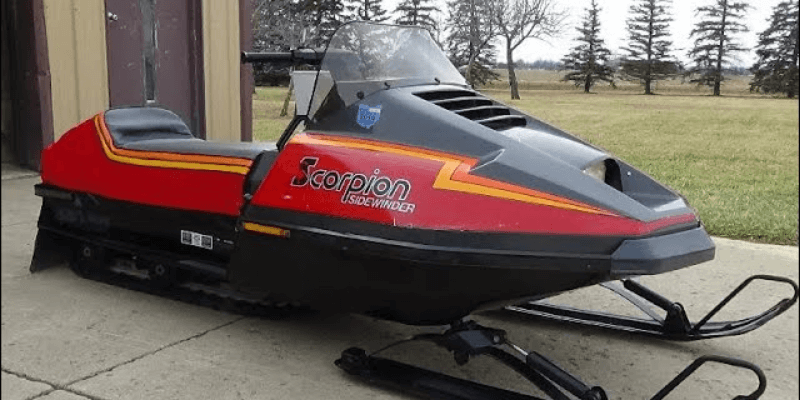 Scorpion snowmobiles were another popular brand of machines that appeared during the glory days of snowmobiling in the 1960s and 1970s. These were sought-after sleds during that time, and they are still pretty popular with vintage collectors today.

I’m an avid snowmobiler who has been riding for nearly my entire life. I get out on the trails as often as I can, and I also love learning about the history of these amazing machines. I spent a good amount of time researching the information in this article.

This post will be all about Scorpion snowmobiles. I’ll give you a short history of the brand and tell you when and why its machines were so popular. I’ll also answer some common questions that people have about Scorpion.

Who Made Scorpion Snowmobiles?

Scorpion snowmobiles were first made by the brand Trail-A-Sled Inc. Trail-A-Sled was around for a few years before it put out the first Scorpion models, and the company actually built sleds that used propellers to create movement instead of a track.

The brand realized that track-driven snowmobiles were the wave of the future and decided to stop producing their propellor models. Soon after, Trail-A-Sled developed another company called Scorpion, Inc, and Scorpion, as most of us know it, was born.

Trail-A-Sled itself was started by a guy named Glen Gutzman, who had a business partner named Donald Bergstrom. These two met some other people in the air sled industry, and they worked together to get the new company off the ground.

When Was the First Scorpion Snowmobile Made?

The first Scorpion snowmobile model was made by Trail-A-Sled in 1965. That year, the company put out a machine called the “Scorpion.” It featured an all-rubber track that was an innovation for its time.

Scorpion was not a separate brand in 1965, but the first official models under this name were built. They were an immediate hit with snowmobile fans, and over 500 machines were made in that year alone.

After several solid years of production and continued growth and popularity, the owners of Trail-A-Sled decided it was time to cash out. They sold their company to Fuqua Industries, an Atlanta, Georgia-based corporation, in 1969.

Where Were Scorpion Snowmobiles Made?

Scorpion snowmobiles were first made in the Cuyuna Lakes, Minnesota area. Minnesota was a breeding ground of sorts for some of the first snowmobile manufacturers, and Trail-A-Sled (the creator of the first Scorpion) got its start in the state.

Even after Fuqua Industries purchased Trail-A-Sled, most of the snowmobiles were still produced in Minnesota. This was a great source of jobs and opportunities in the area, and Scorpion is still important to the local community to this day.

Scorpion made many different models throughout its existence. I’ll highlight some of the best and most popular models the brand put out here.

1965 was the first Scorpion model put out by Trail-A-Sled. They produced about 575 machines for the year, and they featured an all-fiberglass construction with two different models, including:

In 1966, the Scorpion featured a steel tunnel instead of an all-fiberglass construction. There were around 2,000 machines that came out this year. The models included:

Production continued to expand in 1967, and so did the capabilities of Scorpion snowmobiles. Models from that year include:

1968 was a tough year for Trail-A-Sled and Scorpion because of a fire at one of their production facilities. But they still put out around 6,000 machines with models including:

1969 was when Trail-A-Sled was sold, and Scorpion officially became a brand. This opened up the doors for increased production capacity, and around 16,000 machines were made with models including:

1970 saw the release of one of the most popular models the brand created – the Stinger. The popularity continued to grow with models including:

What Was the Fastest Scorpion Snowmobile?

Scorpion stopped making snowmobiles in 1981. This was the last production year that the brand produced any machines, with the Sidewinder and Whip being the most popular models.

Who Bought Out Scorpion?

In 1978, Scorpion was sold to Arctic Enterprises. This was a rival snowmobile company, better known as Arctic Cat. Arctic Cat didn’t want to continue making Scorpions, so they ended production in 1981.

Scorpion Snowmobiles for Sale: Where to Look

I think one of your best bets for finding a Scorpion snowmobile is to head to Cuyuna Lakes, Minnesota, and ask around. This is still the mecca for Scorpion machines, and you are likely to find some there.

If you can’t get to Minnesota, look around on popular resale sites like Craigslist or eBay. You can also go through snowmobile forums like Vintage Sleds and look through the classifieds available there.

Scorpion Snowmobiles Parts: Where to Look

Again, you’ll probably find the most parts where the most Scorpion sleds are – up in Minnesota. There are likely to be snowmobile repair shops or even Scorpion shops up there.

If you can’t get to the Land of 10,000 lakes, do some online searching for parts or ask the snowmobile repair shops in your local area. There’s a good chance you’ll be able to find what you’re looking for that way.