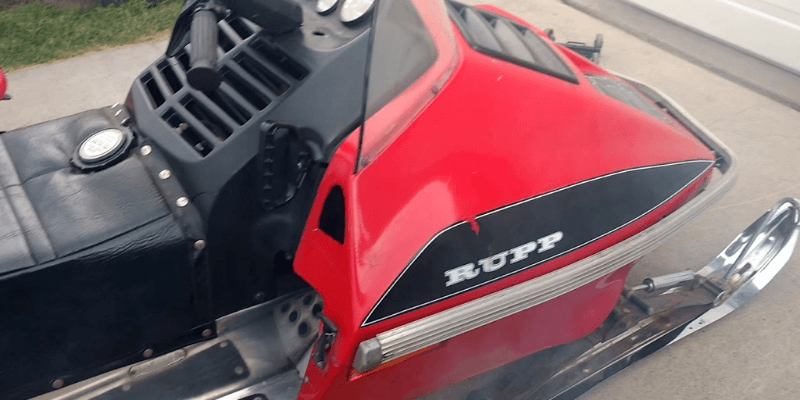 Rupp snowmobiles were a short-lived but somewhat popular brand that was around during the 1960s and 1970s. These machines are most known for being fast for their time, and they still have a vintage demand today.

I’ve been an avid snowmobiler for most of my life. I appreciate everything about these incredible machines, and I always try to learn about vintage brands and models. I’ve done some research to come up with the information found below.

This post will spotlight Rupp snowmobiles. I’ll give you a brief history of the brand, provide the names of some of their most well-known models, and answer a handful of common questions other riders ask about Rupp.

Who Made Rupp Snowmobiles?

Mickey Rupp was the founder of Rupp snowmobiles. He was the son of a successful entrepreneur named Herbert Edmund Rupp and learned a lot about business from his dad. The success of the Gorman-Rupp corporation helped enable Mickey Rupp to start his business.

But Rupp didn’t exactly start with snowmobiles. He actually made go-karts before ever trying to create on-snow machines. Mickey Rupp gained a reputation for building and driving these go-karts, and that recognition also helped with his future snowmobile endeavors.

When was the First Rupp Snowmobile Made?

The first prototype snowmobile that Rupp built was in 1964. Commercial production began in the following years, and 1965 saw the first production sled from the company. The first models had Tohatsu 2-stroke engines.

The brand built around 500 machines in 1965, and the brand’s popularity went up from there in the following years.

Where were Rupp Snowmobiles Made?

Rupp snowmobiles were made in Mansfield, Ohio. This is the same town where Mickey Rupp’s dad founded the Gorman-Rupp corporation, so it’s the place where he decided to start building snowmobiles.

Rupp put out a number of pretty popular sleds during its life. I’ll provide information on some of the best models below and a list of other available models.

The Nitro was probably the most popular Rupp snowmobile. This was also one of the fastest models that the brand put out. It came in 340cc and 440cc models. And the Nitro 440 was the fastest, reaching reported speeds of 80 miles per hour.

The Nitro II came out in 1974 and had a few significant design improvements from its predecessors. It had a fan-cooled engine and featured a new chassis that helped improve handling and overall performance.

The American was another popular Rupp model, and this one was branded as a family snowmobile. It was available between 1971 and 1975. The American had a wide track that made it very stable and came with a 340cc or 440cc engine.

Other Rupp models include:

What was the Fastest Rupp Snowmobile?

The 1976 Nitro 440 was probably the fastest model the brand put out. It featured a comfortable race-like suspension alongside a liquid-cooled engine. These combined to help the Nitro 440 reach performance speeds.

Other Nitro models were also built for speed, and it depends on who you ask as to which of these were the fastest. The Nitro always gets the award for fastest, but I’ve heard some people compare the ‘76 to the ‘77, and there’s debate over which of these is faster.

The 1977 Rupp Nitro 440 toped out around 80MPH (though I’ve heard some riders claim it goes faster) and had 80 horsepower.

When did Rupp Stop Making Snowmobiles?

Rupp stopped making snowmobiles in 1977. The company was purchased by another brand that year. Rupp officially went out of business in 1978.

Mickey Rupp stopped working with the brand in 1973 as well, which is another reason the brand ended, but we’ll get into those details below.

Why did Rupp Stop Making Snowmobiles?

Several factors contributed to the end of Rupp. The 1970s was a tough decade for many snowmobile brands, and a lot of them couldn’t survive the oil crisis and following economic recession that occurred.

The beginning of the end started in 1972 when poor snow conditions and a rise in oil costs led to a severe decline in the popularity of snowmobiling. The company’s profits really suffered during this time, and Mickey Rupp had to sell his stake away.

Even under new ownership, Rupp couldn’t really get things back to the levels of success that the brand once had. Sales continued to decline in 1974 and 1975. The brand continued to put out excellent machines, but internal problems would soon doom it.

In 1977, the company that owned Rupp filed for bankruptcy. But this didn’t quite end the brand, and Arctic Cat came in to help slim down production and increase sales. But it didn’t really work, and Rupp officially when out of business in 1978.

Rupp Snowmobiles for Sale: Where to Look

Rupp snowmobiles are another one of those somewhat hard-to-find vintage machines. They are out there, but you definitely need to cast a wide net when searching for a used one. But I’ve seen them in multiple places, so it is possible to track them down.

There are two sites that are a good starting point for finding a Rupp.

OldRupps.com has a classified section that lists, you guessed it, old Rupp sleds. The site is a little old-school but has some good information.

Vintage Sleds is a forum that has a classified section where you might be able to find a Rupp or other older machine. It’s also worth searching around on other snowmobile forums because you never know what might turn up.

You can also look on modern resale or auction websites like Craigslist and eBay. These aren’t going to be a sure thing, but there’s always a chance that you can find a Rupp, especially if you live in a popular snowmobiling area.

Also, ask around with people in your local snowmobiling community. They can often point you in the right direction or at least help you narrow down your search. Plus, you’ll make new friends this way.

Rupp Snowmobile Parts: Where to Look

Rupp snowmobile parts can also be a bit challenging to find. I always start with simply plugging in my part number and sled model on a Google search and see if anything comes up. Several sites might have parts.

If that doesn’t work, you’ll need to search or ask around at snowmobile repair shops, small engine shops, or junkyards. Junkyards in popular snowmobile areas can be hit or miss, but you can find some treasures if you get a hit.

If you get to know your local small engine repair person, this is also a good way to get leads on parts. If they can’t get you the part you are after, they might be able to point you in the right direction at least.