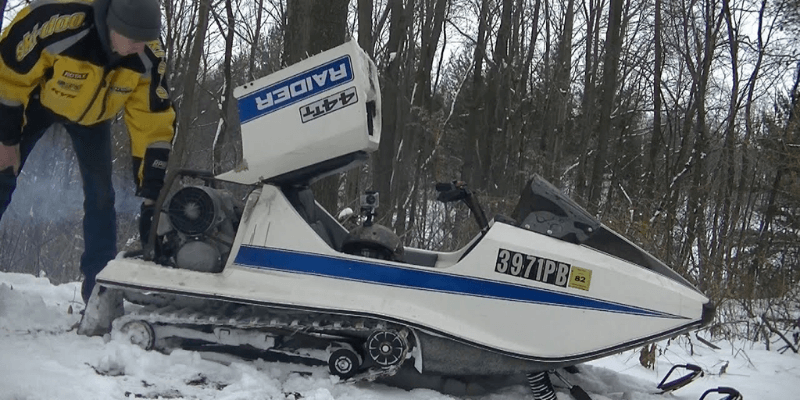 Raiders were a unique snowmobile that was only around in the 1970s. These machines looked like something out of Star Wars and featured a two-track design that was a distinguishing aspect of the models the brand put out.

I’m a lifelong snowmobiler who loves everything about these incredible machines. I’m a big fan of vintage snowmobiles and have done a bunch of research on Raider snowmobiles to come up with the information you’ll find below.

This post will do a quick dive into Raider snowmobiles. I’ll tell you when these snowmobiles came out, what was so cool about them, and where you can try to buy them or find parts if you have one sitting around.

Who Made the Raider Snowmobile?

Raider snowmobiles were made by a company called Leisure Vehicles, Inc. The founder of this company was a guy named Bob Bracey, and he was an engineer with experience designing race cars. This gave him a unique perspective on developing snowmobiles.

Leisure Vehicles, Inc. wasn’t known for much else other than the Raider. The company wasn’t around for too long, so not that many people know about it. Even if you know of Raider, you probably have never heard of its parent company.

What Year Did Raider Make Snowmobiles?

Raider snowmobiles were made from 1971 to 1975. That’s a pretty short amount of time, but those years were kind of like the glory days of snowmobiling when a lot of new innovations and designs were coming out.

The design for the snowmobile was around for about two years before they were commercially available. So with that in mind, technically, the snowmobiles existed between 1969 and 1975, but you couldn’t buy one until 1971.

Every Raider model that came out was unique from other snowmobiles at the time and from what we all recognize as a snowmobile today. This is part of the reason why there is still some substantial interest in these machines.

They all had engines in the rear, different from every snowmobile that you find today. And they also had a two-track design, whereas modern sleds (and every other sled at the time) had a single track.

Those two factors alone made the Raider stand out in the marketplace and on the trails. But these machines also had cockpit-style seating, which was completely different than the bench-style seating we are all used to today.

The first commercial available Raider models came out in 1971. These were the Raider and the Roamer. The Raider had a single-cylinder 2-stroke engine. The Roamer had a 4-stroke Briggs and Stratton engine.

In 1972, the models were redesigned pretty heavily, and the machines were longer with better shocks and skids. The models that came out this year were the 290, 340, 400, and 440, all of which had 2-cylinder engines.

There was also a model in 1972 called the Bandit, which was built to be lighter and more aerodynamic and was marketed as more of a racing-style sled. But there weren’t many of these produced.

In 1973, only two models came out – the 34tt and 44tt. These became the most popular snowmobiles that the company built and saw the most sales.

In 1974, the Hawk, the Eagle, and the Double Eagle were the snowmobiles Raider put on the market. The Eagle wasn’t that different from the previous year’s models, and they were essentially rebranded unsold editions of the 34tt and 44tt.

The 1974 Hawk was a very basic and affordable model that didn’t have many features or add ons. The Double Eagle was a brand new design that was bigger and used a double coil suspension.

1975 was the last year that Raider snowmobiles were available, and most of the models this year were leftover Double Eagles from the year before. These came with a 440cc engine and different graphics to make them look like new models.

Raider stopped making snowmobiles in 1975. This was the last year the company produced any new machines, although some rebranded 1975s came out for sale in 1976.

Even the Raiders that were sold in 1975 were made in 1974, so technically, the last year that Raider manufactured machines was 1974. But they still sold them up until 1976.

What Happened to Raider Snowmobile?

Raider snowmobiles stopped producing snowmobiles in 1976. Several factors caused this, and we’ll look at them in the section below. But like many smaller snowmobile brands at the time, they didn’t have enough sales to continue.

Raider snowmobile failed for a few different reasons that all came to a head in 1975. This was a bad winter season with little snow, so there wasn’t much interest in snowmobiles, and sales were down.

There were also new restrictions on the emissions of snowmobiles and how loud they could be, which required new engineers and design costs. The brand’s founder also left this year, which didn’t help either.

Raider Snowmobile for Sale: Where to Look For

There weren’t many Raider snowmobiles made, so they can be really challenging to track down. Your best bet is to ask around on the popular snowmobile forums, look through resale sites, and ask around your local snowmobile community.

They are out there, but with only about 20,000 machines made, Raiders can be tough to get your hands on.

Raider Snowmobile Parts: Where to Buy

Just like with finding an actual Raider snowmobile, their parts can also be really challenging to find. If you have a snowmobile repair shop or small engine repair shop in your area, that’s a good place to start.

You can also look online and try to find a similar part to the one you are looking for. You might not be able to find an OEM part, but if you are handy, you can get something to work.

Junkyards are another option, but I’ve never seen a Raider at one.

How to Determine Raider Snowmobile Value

Because Raider snowmobiles are such a unique and hard-to-find machine, they can fetch a pretty decent value, But it’s hard to say exactly what a snowmobile is worth because it depends on what condition it is in and what someone is willing to pay for it.

When Raiders came out, they cost between $1,000 to $1,500. I bet you could get about ten times that today if you have one in good operating condition.

I’ve read in some forums that Raiders can get up to about 85mph, but those aren’t verified in any way. My guess is that you could probably push them up to 50 or 60 pretty easily, though, depending on what type of conditions you are riding on.