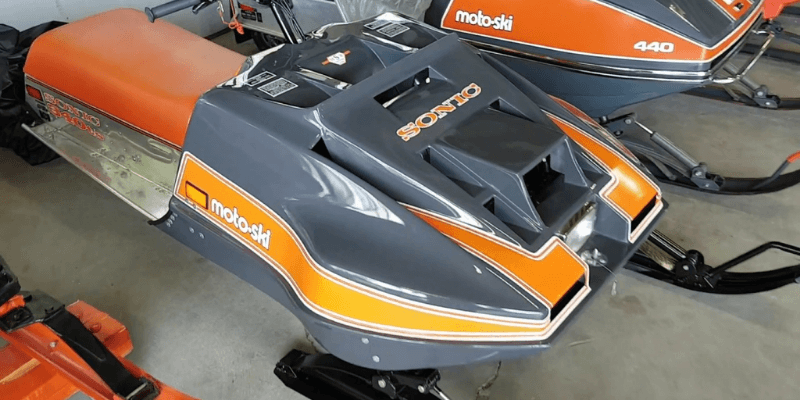 Moto-Ski was a brand of snowmobiles for about 20 years, from the mid-1960s to the mid-1980s. The machines had a reputation for being very durable, and they were one of the most popular Canadian snowmobile brands for a while.

I’m a lifelong snowmobiler with a huge passion for everything about these amazing machines. I love to get out and ride as often as possible, and I also love researching and learning about different brands.

This post will highlight Moto-Ski snowmobiles. I’ll provide you with some history of the brand and explain what made the machines popular. I’ll also address some common questions riders have about Moto-Ski.

Who Made the Moto-Ski Snowmobiles?

Moto-Ski snowmobiles were made by a company named Les Industries Bouchard in Canada. They quickly became one of Canada’s most popular snowmobile brands and were well known for being reliable and durable.

After about a decade of production, Les Industries Bouchard and Moto-Ski were purchased by another snowmobile company called Bombardier. Under this new ownership, the brand remained in production for about another decade.

When Were Moto-Ski Snowmobiles First Made?

Moto-Ski snowmobiles were first made in 1963. Les Industries Bouchard, the company that created Moto-Ski, first started manufacturing the machines in 1962, but they didn’t go into widespread production until the following year.

Where Were Moto-Ski snowmobiles Made?

Moto-Ski snowmobiles were first made in La Pocatiere, Quebec, Canada. The Les Industries Bouchard production facility was located on the south side of the St. Lawrence River in La Pocatiere.

Moto-Ski put out machines for about 20 years, which is a good stretch for an early snowmobile brand. But they were bought by another company in the mid-1970s, so Moto-Ski models only cover about ten years.

They had many different models over those years, and the brand always had a solid reputation for durability and reliability.

Moto-Ski did not technically have model names during the first two production years. Instead, machines that came out between 1963 and 1964 were listed based on their year and the size of the engine built into them.

In 1965, Moto-Ski kept up with no real model names, but they started using long track and short track sleds. Below are the Moto-Ski models from 1965.

In 1966, the company finally started coming up with actual model names, like most of the other brands in the industry. All models this year had different sizes of Hirth engines. The models from 1966 are listed below:

When Did Moto-Ski Go Out of Business?

Moto-Ski was purchased by a larger company (more on that below) in 1971. But there will still Moto-Ski sleds made until 1975. After the sale, the machines were still in production into the 1980s, but not necessarily under the Moto-Ski name.

When Was Moto-Ski snowmobiles Acquired by Bombardier?

Bombardier purchased Moto-Ski from Les Industries Bouchard in 1971. This wasn’t the end of the Moto-Ski brand, but it did start to decline around this time. There were still Moto-Skis produced in the 1970s and available until the 1980s.

Moto-Ski was doing well as a brand from a sales perspective, but other financial factors led to the brand being sold in 1971. The machines were still popular with riders and durable in many ways.

Moto-Ski Snowmobiles for Sale: Where to Look

Moto-Skis were popular snowmobiles during their glory days, but they can be more difficult to track down today. A good place to start looking for a used one is online through resale sites such as eBay and Craigslist.

I also recommend asking around with your local snowmobile community. If there are snowmobile clubs or get-togethers, you can ask other riders if they know of or have seen any Moto-Skis around. It never hurts to ask!

Moto-Ski Snowmobile Parts: Where to Look

Tracking down Moto-Ski parts can also be a bit challenging, depending on the make and model of the machine you own. Again, starting with an online search is a good idea. Just search for the sled model and part name through Google or eBay to see if anything turns up.

If that doesn’t work, ask around on the snowmobile forums or call your local snowmobile or small engine repair shop. If you know a skilled mechanic, they will usually have some ideas on what to do if you can’t locate the exact part you are looking for.