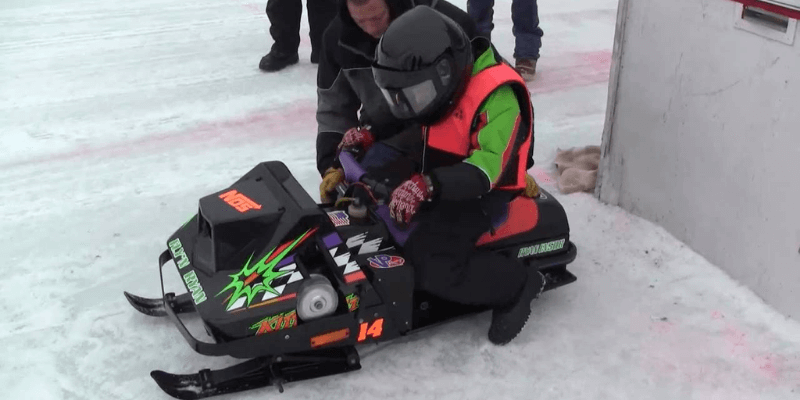 The Kitty Cat snowmobile was a children’s machine created by Arctic Cat. These sleds were smaller in size and offered a great way for little riders to learn how to take to the trails. They were fun and safer to ride, making them popular with parents and kids alike.

I’ve been snowmobiling for as long as I can remember, and I like to learn everything I can about all types of sleds. I’ve done a bunch of research on the Kitty Cat and want to share what I’ve found with everyone interested.

This post will explore the Kitty Cat snowmobile in depth. I’ll answer some common questions about these machines and give you a brief history so you can understand more about these sleds and why you might want to find one.

Who Made Kitty Cat Snowmobiles?

Kitty Cat snowmobiles were made by one of the most popular snow machine brands ever – Arctic Cat. Arctic Cat wanted to offer a machine designed specifically for smaller riders to get them started young and provide them with a long-lasting love of the sport.

Arctic Cat marketed the Kitty Cat to families who loved winder sports and pushed it as a way for everyone to have fun in the snow. This was one of the first children’s snowmobiles created, and it’s probably the most successful of all time.

What Year Was the First Kitty Cat Snowmobile Made?

The first Kitty Cat snowmobile first came out in 1971. The first model was displayed at the 1971 USSA World Series of Snowmobiling in New York. It quickly caught the attention of families with kids and became a staple of the Arctic Cat lineup.

There were only about 50 Kitty Cats made in 1971, and they all came with a 2-cylinder Clinton engine. These were pint-sized machines that could still scoot around in the snow and looked much like the full-size Arctic Cat models they were modeled after.

The Kitty Cat was in production between 1972 and 2000. Despite this pretty extended lifespan, the models didn’t change all that much from year to year. A new Kitty Cat was offered every one of these years, but they didn’t always have significant upgrades or differences.

The 1972 Kitty Cat featured a one-cylinder 2-stroke engine. This was actually a Kawasaki engine, and it had 60cc displacement. It had a forced-air cooling system and a pull-start engine. As you can see, the engine was pretty tiny.

It was also only about 56-inches long and 22-inches tall. Arctic Cat even marketed the Kitty Cat as being able to fit in the trunk of your car, which with those dimensions might have been possible if you had a big trunk!

Some changes to the model did occur throughout the years. In 1973, the Kitty Cat featured a metal gas tank instead of a plastic one, and in the following years, many improvements were made to the graphics and visual look of the sled. It really looked like a mini snowmobile.

In 1977 the Kitty Cat began using a different engine than the Kawasaki 2-stroke that came standard on the first five years of models. A Suzuki 60cc engine was used in models for a long time after that.

There were not any Kitty Cats made from 1982 to 1984 because this was when Arctic Enterprises went out of business. Things got revamped in 1985 when another parent company bought up Arctic Enterprises, and the Kitty Cat was reborn.

In 1985, the Kitty Cat featured a headlight that was always on and a windshield as added safety measures. In the 1990s, models started to come with a steel chassis and plastic hood, with the 1995 models getting a rear bumper.

The last Kitty Cat snowmobiles were made in the year 2000. After this, Arctic Cat started making a larger youth or mid-sized sled called the Z120 because this style of sled became more popular than the smaller Kitty Cat.

As engines developed and the toy feel of the Kitty Cat became less desirable, Arctic Cat didn’t see much of a market for it. The youth-sized Z120 was much more capable in the snow and had a 4-stroke engine.

While you can’t buy a brand new Kitty Cat any longer, youth-sized snowmobiles remain extremely popular, and all of the major brands make at least one model. This was all made possible by the popularity of the Kitty Cat, so in a way, its popularity lives on.

Kitty Cat Snowmobile for Sale: Where to Look

With such a long run of production years, there are still quite a few Kitty Cat snowmobiles for sale. If you know where to look, there’s a good chance you can get your hands on one.

There is a Facebook group dedicated exclusively to Kitty Cats. This is a good starting point for your search. You can also look on other resale sites like Craigslist or Facebook marketplace to see if there are any machines in your area.

Snowmobile Trader is another option to search around on. This is basically a snowmobile classifieds site, and there are all sorts of different machines up for sale here. Just search for the Kitty Cat and see what results you get.

You should also look around the classified sections of the popular snowmobile forums. There are a lot of avid snowmobilers here, and you never know who might have a Kitty Cat they don’t want anymore.

If you live in a popular snowmobiling area, ask around with other riders or look through local classifieds. You can also search in the junkyards to see if you can get your hands on an old one and fix it.

You can use a few different sources to locate Kitty Cat snowmobile parts. Again, since there are still a lot of these machines around, it’s easier to find parts than it is with some less popular vintage snowmobiles.

Searching eBay is an excellent place to start. Just type the model year and name of the part of your Kitty Cat that you need. You can also check out this parts resource and forum from the Kitty Cat Snowmobiles site.

If you can’t find them online, you can search around at an Arctic Cat dealership or snowmobile repair shop in your area. A junkyard or small engine repair shop also might have the parts you are looking for, but you’ll need to search or ask around.

There’s no single way to determine the value of a Kitty Cat. If you look through the classifieds mentioned above, you can get an idea of what prices they are currently going for and make a good guess on your value.

When Kitty Cats first came out in 1972, they cost around $300, and in 2000 they were about $1,300. So that’s a price range of what they cost brand new. If you have one in excellent shape, you might be able to ask above those new prices because of vintage demand. 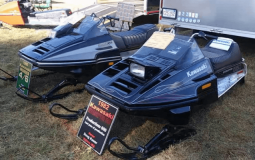 What Happened to Kawasaki Snowmobiles?