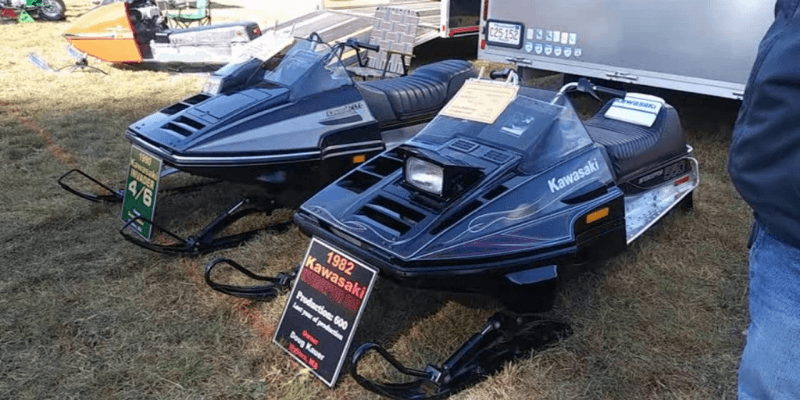 There have been many snowmobile brands that have come and gone over the years. Even if the company made solid machines, long-lasting success is never guaranteed. Kawasaki is one of these brands that made some great sleds during its glory days but is now long gone.

I’ve been snowmobiling for decades, and I love everything about these incredible machines. I also like to learn all about snowmobile history, including the brands and models that have influenced the industry over the years.

This post will take a look at Kawasaki snowmobiles. I’ll provide a quick history of the brand and provide you with some other useful facts you might find interesting. Knowing about Kawasaki is a must if you are a fan of vintage sleds.

What Years Did Kawasaki Make Snowmobiles?

Kawasaki started as an aircraft and motorcycle manufacturer that also made engines for small cars. The company was based in Japan and started in the 1960s. It expanded into different types of machines, including snowmobiles, in the 1970s.

The brand opened up a production facility in Lincoln, Nebraska, in 1974. At this time, snowmobiles in the US and Canada were very popular. The company saw this opportunity and started to get into the snowmobile game.

Under the Kawasaki name, the brand produced snowmobiles for a short time between 1977 and 1982. So technically, Kawasaki snowmobiles were only manufactured for about five years, which is really brief.

But the Kawasaki brand acquired a snowmobile brand (more on that in the sections below) in 1976 and used a different name for them until around 1978. This window was brief either way, but they were not in production for long.

Why Did Kawasaki Stop Making Snowmobiles?

Several factors caused Kawasaki to stop making snowmobiles. A big part of the reason was because of the oil crisis of 1973. This caused fuel prices to skyrocket, which made many consumers wary of using vehicles such as snowmobiles for sport.

The oil crisis came right alongside two winter seasons of limited snowfall, making it challenging to go snowmobiling even if the gas prices weren’t a factor. These two issues combined drive down the demand for snowmobiles quite a bit.

When demand dropped, Kawasaki wasn’t making a profit off of their snowmobiles, so they made a business decision after several years of selling them to shut things down and stop making them.

Sno-Jet snowmobiles were another fairly popular brand during the 1960s and 70s. The company was pretty successful in its earlier years but saw sales start to decline as more brands created snowmobiles and saturated the market.

Glastron Boat Company purchased the original Sno-Jet brand in 1968, and this came at the start of the peak of snowmobile sales. Sno-Jet (under Glastron) remained in business until the mid-1970s, when sales really started to decline.

In 1976, Kawasaki purchased the Sno-Jet brand from Glastron Boat Company. This was after Kawasaki built an assembly plant in the US and was eager to enter the snowmobile industry.

Kawasaki produced snowmobiles under the Sno-Jet name for two years in 1976 and 1977, and then it started to remove the name from its machines and go by Kawasaki exclusively for the next five years.

As you can imagine, with only five years of production, Kawasaki didn’t have nearly as many models as the well-known snowmobile brands that are still in production today. Still, there were a handful of options that came out every year that the brand existed.

Kawasaki Snowmobiles For Sale: Where to Look For

Even though Kawasaki snowmobiles haven’t been in production for 40 years, you can still get lucky and find a used one for sale if you know where to look. They can be difficult to track down, but you never know when one might turn up.

One of the best ways to find a used Kawasaki is to search through and ask around different snowmobile forums.

Kawasaki Trax is a forum dedicated exclusively to these machines. But many of the popular snowmobile forums have classified sections where one of the models might turn up.

You can also look through resale sites and classified ads in your local area if you live somewhere that is a popular snowmobiling location. This might not be as reliable, but it’s always worth checking out.

Another way you can locate a Kawasaki is to talk to people or friends in your local snowmobile community. They might know of someone who has an old Kawasaki lying around in a garage that doesn’t get used.

Unfortunately, you can’t just go to the Kawasaki dealer and buy a new sled because that dealer doesn’t exist. But if you are active with your search and committed to locating one, they are still out there.

Kawasaki Snowmobile Parts: Where to Buy

For the same reasons why Kawasaki snowmobiles are somewhat hard to find, so are their parts. Since they aren’t in production any longer, you sometimes need to search wide and far to locate a particular part.

Kawasaki Parts Nation is a good resource with many aftermarket parts. This site isn’t exclusive to Kawasaki snowmobiles, but it might help you get pointed in the right direction, or you can find the exact part you need.

You can also search through sites like eBay and see if the part is available. This will allow you to conduct a worldwide search, and it’s always good to cast a wide net when looking for vintage parts.

The other route to pursue is to look around at junkyards or snowmobile repair shops. If you can find the model of your sled in a yard, you can usually pick and pull the parts you need and transfer them over to your sled.

Snowmobile or small engine repair shops are also good resources. The people who run these shops are very good at finding hard-to-get parts and fixing up older machines. It’s worth calling any of them in your area to see what they can do.

The truth is, you might have to piece together a Kawasaki rebuild with any parts you can find, and they might not always be OEM. Still, it’s better to get a vintage sled running that way than letting it gather dust in the shop or end up in the junkyard.