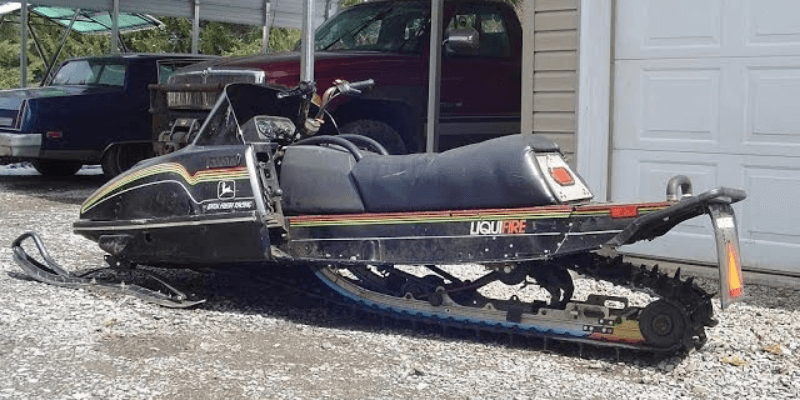 John Deere is a well-known manufacturer of tractors and other farm-related equipment, but the brand has also made snowmobiles for a while in the 1970s and 1980s. They featured the classic green and yellow coloring and are collector’s items today.

I’ve been an avid snowmobiler for most of my life, and I enjoy everything about these incredible machines. I like to learn about vintage snowmobiles, and I’ve researched John Deere and the snowmobiles the brand created.

This post will give you information on John Deere snowmobiles. I’ll give you a background on the history of the models the company manufactured and provide some answers to a few common questions related to them.

Time to get rolling.

Who Made John Deere Snowmobiles?

John Deere snowmobiles were built and manufactured by John Deere. This brand is still well-known worldwide for making farm equipment and machinery, among many other things. They didn’t make snowmobiles for that long.

Even though John Deere designed the snowmobiles, the company used other brands’ engines. Depending on the year, you can find either a Kawasaki, CCW, or Kioritz engine in its models.

John Deere started making snowmobiles in 1972. They began research and development on them in the years prior to this, but there were no officially branded John Deere snowmobiles until ‘72.

The initial models were manufactured in Wisconsin at the same production facility that put out different machines and equipment offered by the brand.

John Deere had many different models during its 12 year run of making snowmobiles. Below, you will find all of the company’s models alongside the years that particular model was available.

The Liquifire was one of the faster snowmobiles that John Deere produced, and it’s gained a bit of popularity with vintage sleds collectors for that reason. It came with a 436cc 2-stroke Kawasaki engine that had around 70 horsepower.

While that doesn’t seem like much, it was really light compared to other snowmobiles of the same year and could zip around with the best of them.

The Snowfire is another popular collector’s machine, and this was one of the last new models that John Deere developed. This one also came with a 2-stroke Kawasaki engine but had less power than the Liquifire with only 35hp.

John Deere stopped making snowmobiles in 1984. That was the last year that the brand put out any new models. The company wasn’t selling as many machines as it wanted to for profits to stay high.

Around this time, one of the guys responsible for really making John Deere snowmobiles popular, Robert Carlson, left the company. This also contributed to the brand discontinuing its snowmobiles.

Who Bought Out John Deere snowmobile?

Another famous snowmobile manufacturer, Polaris, bought out John Deere in 1984. This was the end of the line for John Deere snowmobiles. Some people thought that Polaris would still sell sleds and parts under the John Deere name, but they did not.

Even though John Deere stopped making snowmobiles, they did not stop making other products. The rise of their now-famous tractor line came right alongside the downfall of their snowmobile line.

John Deere Snowmobile For Sale: Where to Look

There are a few different ways to look for John Deere snowmobiles for sale. A quick online search will direct you to a few locations that seem to have these older sleds.

There’s a Facebook group that has John Deere snowmobiles and parts. And you can connect with other riders who might have sleds for sale.

Motorsports Universe is an auction site with several John Deere snowmobiles currently up for bids. You can also look at eBay to see if there are auctions.

And the popular snowmobile forums are also a good resource to use to track down a John Deere. Vintage Sleds is probably the best for older sleds, but you never know when one might pop up on a forum.

It’s also a good idea to ask around your local snowmobile community to see if anyone has one for sale or knows of someone who does. Finding older machines is a bit of a treasure hunt, so it never hurts to get creative.

There are some good resources out there for locating John Deere snowmobile parts if you know where to look. Since John Deere is still a company and there is an interest in its snowmobiles with vintage sled enthusiasts, it’s not as hard to find parts as other older sleds.

eBay is always a good initial place to start your search. If you know the name or the part you need and the model of your machine, type that in and see what comes up. You can also do a regular search to see what’s out there.

There are also a few sites that sell John Deere snowmobile parts, but they might not have every year and model. New Breed Parts is one of these, and they seem to have parts for 1980 and up John Deere machines.

Dennis Kirk also has some John Deere parts, and this site looks to have smaller and more general parts like belts and idlers. But it’s good to look around in as many places as possible.

If you have a John Deere dealership or repair shop in your area, that’s another good place to look for parts. You never know when you might talk to an old-timer who knows just what you are looking for or can at least point you in the right direction.

Here are a few quick answers to some of the most frequently asked questions about John Deere snowmobiles.

Who made the engines for John Deere snowmobiles?

There were several different John Deere snowmobile engines during their production. Kawasaki engines were featured from 1979 to 1984, and Kioritz engines were used before that. From 1972 to 1975, CCW was listed as the engine, but Kioritz made those as well.

What was the fastest John Deere snowmobile?

The John Deere Liquifire is usually said to be the fastest snowmobile that the brand produced. It was lightweight and had a reasonably powerful engine that could compete with many of the quickest production models in the 70s and 80s.

John Deere snowmobiles were pretty reliable and worked well. But they were also known to be very large and weigh a lot. This made them difficult to handle, and they were less maneuverable than other lighter brands.