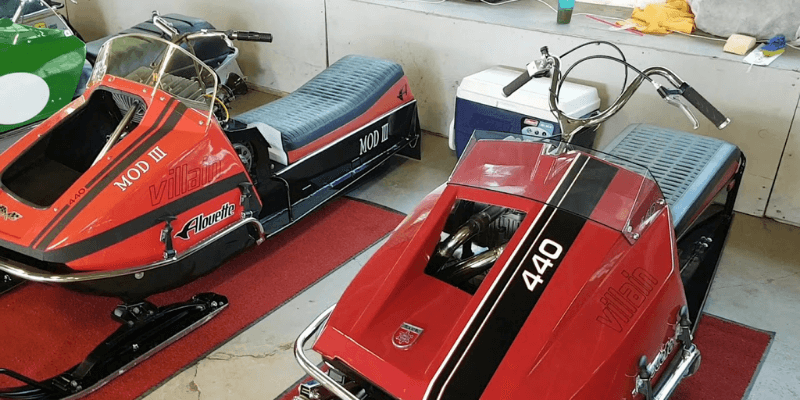 Alouette was a Canadian snowmobile brand that put out some popular machines while the brand was around. Alouette’s models were fast for their time and popular in early racing circles, despite not being in existence for very long.

I’ve been an avid snowmobiler for nearly my entire life. I love to go out and ride as often as possible, and I also love learning about the history of these incredible machines. I’ve spent time researching to come up with the information you’ll read here.

This post will dive into Alouette snowmobiles. I’ll give you a quick history of the brand and provide you with key information about some of their best models. I’ll also answer a few common questions that snowmobile fans have about Alouette.

Who Made Alouette Snowmobiles?

Alouette snowmobiles were first created by a company called the Featherweight Corp. This corporation was founded in Quebec, Canada. Alouette was around for about a decade, and there were several different owners of the brand during that time.

After the initial run of models, the brand left Quebec and went into the US in Maine. Then another company named Coleco purchased it, and the headquarters were based in Connecticut.

And then, after the Coleco years, Alouette was purchased by Rupp Manufacturing in Ohio, which is another pretty famous vintage snowmobile brand name that you probably recognize.

When Was the First Alouette Snowmobile Made

The first Alouette snowmobiles were made in 1967. The first model that the company put out was called the 707. These ‘67 Alouettes 707 are pretty popular in vintage snowmobile circles today, so if you can find one, keep your hands on it.

Alouette put out a number of pretty sweet machines during its decade-long production run. I’ll highlight all of the models the brand put out here and give you details on some of the most popular ones.

In 1967, the first year that Alouette snowmobiles were in production, the 707 was the only model available. These first sleds had JLO 292 engines that put out about 16 horsepower. There were a few problems, like a leaky gas tank, that were addressed later on.

In 1968, Alouette increased production a bit and put out two different models. But the brand was still getting established, and it didn’t have that much market reach. Models from this year include:

1969 saw increased sales, which led to more research and development into more models and better designs. This year several different models came out with various engines and other features. 1969 models include:

As the decade turned, Alouette started to make a name for itself in the snowmobile industry and created faster and more capable machines.

In 1973, the brand started to gain more popularity on the racing circuits, and one of the models from this year was used by a somewhat famous snowmobile racer named Jaques Villeneuve. Models from 1973 include:

Alouette capitalized on this racing popularity by focusing on that market and developed a model in 1974 that was truly intended to be a racing snowmobile. This was the Super Brute, and it’s one of the most popular models the brand ever created.

The Super Brute had some innovative design features that made it such a popular model. It had an improved front suspension that included a coil-over shock and pivot arm. This was a significant change from leaf spring suspensions that prior models had.

There aren’t any Alouette models listed from 1975, and 1976 was the last year that the brand produced machines under the Alouette name. 1976 models include:

Rupp purchased the brand shortly after this, and the story goes that all of the Alouette models from 1976 were actually just rebranded Rupp machines. So the 1975 models are seen by some people as the last of the actual Alouettes.

There are other rumors out there that Yamaha used some of the design and development of Alouettes in some of their 1980s models, including the popular Phazer, which happens to be one of my favorite vintage sleds after.

If you compare the design of these brands, you will see some definite similarities, but whether that was intentional or a complete rip-off is up for debate. Yamaha is still around, and Alouette is not.

Why Did Alouette Stop Making Snowmobiles?

Alouette stopped making snowmobiles because the company was sold multiple times. On one of those final sales, the parent company decided that they didn’t want to produce the Alouette brand any longer.

This was a part of the Rupp purchase that occurred in 1976, and it was the beginning of the end for Alouette snowmobiles. Rupp wasn’t doing all that great in the snowmobile market during this time, so it didn’t have many resources to keep Alouette alive.

Alouette Snowmobiles for Sale: Where to Look

If you want to find any vintage snowmobile, Alouette’s included, a good place to start is by looking through common online marketplaces and resale sites in your area, such as Craigslist and eBay.

You can also search through these sites all over the world, which will broaden your search and give you more results. You might have to travel to find one, but at least be able to get a good idea of what’s out there.

If you want to try and find an Alouette in person, keep your eyes peeled when you are on the trails and see if you can find anyone riding one. If you want it bad enough, make them an offer on their sled and see what happens.

Alouette Snowmobile Parts: Where to Look

Alouette snowmobile parts can be a little bit tricky to find. Again, a quick online search is the best starting point. Just plug in the name of the part or the model of your sled, and see what results you get.

If that doesn’t give you any leads, you’ll need to search around at snowmobile or small engine repair shops. You can also look through junkyards, and there might be old sleds you can pull parts from if you look in an area where snowmobiling is popular.

Snowmobile forums are another good place to look for parts or old machines. Most of the popular forums have classified sections, and they might also have a section dedicated to parts.