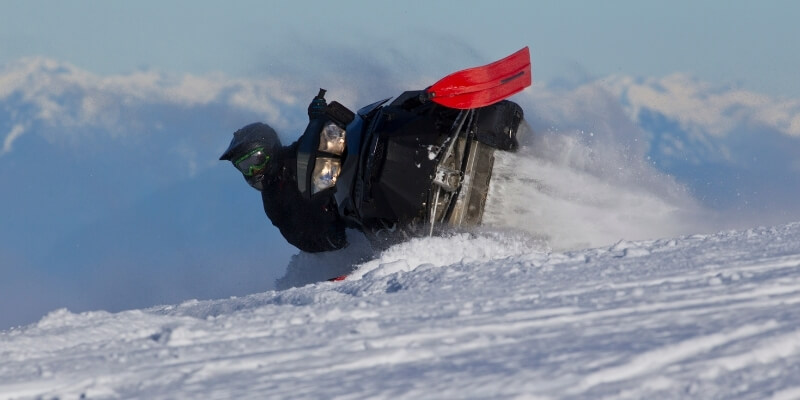 The fastest production snowmobile currently on the market is the Yamaha Sidewinder SRX LE. This machine is built to fly and can reach some impressive speeds, especially for a stock sled.

My name is Chaz, and I’m a huge snowmobile enthusiast – a fanatic even. I keep myself up to date on all of the latest news and trends in the sport. I haven’t ridden the Sidewinder SRX LE, but I’ve researched it heavily.

In this article, I’ll take a look at what makes the Sidewinder such an impressive snowmobile and why it’s so fast. I’ll also show you what to look for in other machines if you love opening up the throttle and pushing things to the limit.

Hang on tight, and let’s get to it!

How Fast is Fast?

The Sidewinder is not going to reach that speed, straight from the factory anyway. This snowmobile has been clocked at speeds approaching 120 mph! There is no official top speed for this sled, but this is the range many publications and riders have mentioned.

This capability is thanks to a powerful engine. We’ll take a look at that in the next section, but if you are looking to reach speeds of anywhere close to 120 mph, you are going to need a very capable machine.

If you want to understand how fast the Sidewinder is, let’s take a closer look at some of its impressive engineering and design features that allow it to reach some of the top speeds in the industry.

Powering this sled is a 4-stroke 998 Genesis Turbo Engine. This 998cc unit is built for ultra-performance and can generate nearly 200 horsepower to accelerate in the blink of an eye and hit top speeds faster than most stock machines.

The engine utilizes high-tech turbo technologies to handle the increased temperatures and pressures that come alongside increased speeds and high performance. It also has three throttle bodies that increase response and limit lag.

The Sidewinder’s YSRC high-performance clutch system also helps increase top speeds by effectively transferring the torque generated by the powerful engine into the rest of the drive train.

Another unique feature is a low profile suspension that uses a dual-rate front spring alongside low preload rear springs to give the machine a lower ride height without sagging into the snow. This helps reduce drag to decrease wind resistance while boosting top speeds.

While the Sidewinder SRX LE is undoubtedly built for speed, it has impressive handling capabilities to keep everything under control while doing so. Staggered carbides are used to keep steering response very precise with a straight steering post to reduce free play.

All of this performance will cost you, and the Sidewinder comes with a base price of just under $18,000. That’s more expensive than a lot of cars!

There are some other high-speed production snowmobiles available from other brands. All the following come in close to the Sidewinder in terms of speed.

The Polaris Rush Pro-S is another snowmobile that is built for speed. This one is powered by the 850 Patriot engine that is known for its high performance and power. It’s an 840cc fuel-injected engine that is liquid-cooled for increased capabilities.

This is a relatively lightweight and low-profile performance sled, which helps boost speed and handling across the board.

This is another really speedy sled that claims to be one the world’s fastest production snowmobiles. It has a 9000-series C-TEC4 turbocharged engine that is built to deliver around 200 horsepower and 8750 rpm.

The Thundercat also has impressive throttle response, which means you’ll get up to those high speeds in a hurry. Other features like engine mapping, aluminum cylinders, and a forged crankshaft showcase speed-centric engineering as well.

The Mach Z is a limited-release sled from Ski-Doo worth looking into for every rider who loves pushing the limits. It comes with the most powerful engine that Ski-Doo has ever offered in the Rotax 900 ACE Turbo R.

This engine gives the sled 180 horsepower and extremely responsive acceleration thanks to a cable-activated iTC throttle. This is another costly model, but if you’re in the market for a fast-performing collectors model, Mach Z has a lot to offer.

Here are some commonly asked questions relating to the fastest snowmobile.

What is the fastest snowmobile you can buy?

The fastest snowmobile that you can currently buy stock from the manufacturer’s floor is the 2021 Yamaha Sidewinder SRX LE. This powerful machine can easily reach the upper range speeds that are possible without heavy modification.

How fast is the fastest stock snowmobile?

The fastest stock snowmobiles listed here all can reach speeds of around 120 mph or more. There aren’t official speeds listed as they can change depending on how they are measured. Stock sleds in the 200 horsepower range can reach these speeds.

Which snowmobile has the most horsepower?

The most powerful stock snowmobile currently available is the Arctic Cat ZR Thundercat which has an impressive 211 horsepower.

If you get the chance to ride any of the fastest snowmobiles listed here, be sure to keep safety in mind when you are hitting the throttle. The faster you go, the easier it becomes to make a mistake that can have drastic consequences.

The need for speed can be irresistible, and I get it. Wear your helmet and have fun, but please ride safely!

How fast have you gone on a snowmobile? Do you know of a faster sled than the machines listed here? Let us know in the comments below!