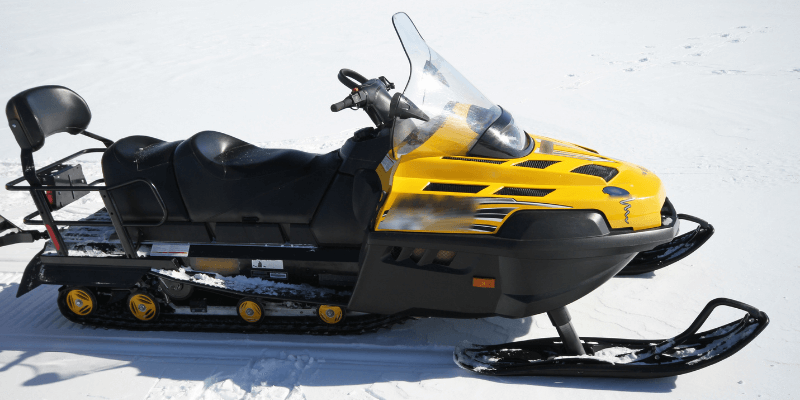 The tunnel on a snowmobile makes up a large section of the rear structure and chassis. It sits over the track and allows the seat and bumper a place to attach to. It’s one of the most important structural parts of the machine.

I’ve been an avid snowmobiler for nearly my entire life. I have been around these machines long enough to understand all of their parts and components. I know what a tunnel is and the vital role it plays in snowmobile design.

I’ll explain what a tunnel on a snowmobile is in detail in this post. I’ll tell you where it’s located, its function, and some other information to help you understand how it all plays into snowmobile design and function.

If you are familiar with automobiles, you have most likely heard of the frame or chassis. This is basically like the skeleton of your car, truck, or SUV. It’s the foundation for the rest of the machine to be built upon.

The tunnel on a snowmobile is essentially the chassis. It’s one of your sled’s largest, most important structural parts, and every snowmobile has one. It serves several different functions, and each of them is pretty critical.

The tunnel is located across the middle and rear of the machine, and it’s shaped like an upside-down U – that’s obviously why they call it a tunnel. You don’t see the entire tunnel because the seat goes over it, but it runs from just behind the handlebars to the track.

As a structural component, the tunnel serves as a building point for many of the other parts that make a snowmobile work. The tunnel holds the rear suspension and track in place, which is one of its most important purposes.

The tunnel also creates the running boards where you place your feet when you ride. Many people think that this is the only purpose of the part, but it is much more critical than simply a part that makes your ride more comfortable.

How the Tunnel Works

The structural function of a tunnel is pretty self-explanatory, and it’s the building point for many other parts of the sled. But a tunnel works in different ways to assist with everyday operation.

In addition to being an attachment point for the track skids, it’s also the connection point for the seats, rear bumper, rails, and lights. All of these are essential for safety and comfort, and the tunnel makes sure they stay in place when riding.

Another significant function that the tunnel has is preventing debris from damaging other parts of the sled as you ride. The tunnel acts like a shield that blocks rocks, dirt, and anything else the track kicks up from getting into the small parts of the sled.

The shape and placement of the tunnel also help prevent all of the trail debris the track kicks up from potentially hitting your body. A snowmobile wouldn’t really work without a tunnel, but if it did, your backside would inevitably get hit with debris.

The tunnel also has a critical performance function with liquid-cooled snowmobiles. This type of machine requires a heat exchanger to help keep the engine from overheating. And the tunnel provides the perfect place for this part to attach to.

But it also helps the heat exchanger do what it is supposed to do. As the sled moves over the snow, the track throws snow up into the tunnel, hitting the heat exchanger. This helps keep the part cool, which plays an integral role in its performance.

The tunnel also plays a role in the identification of a snowmobile. This is where the VIN number of your sled is located, which is a unique number that identifies the make and model of your machine. This is very similar to the frame of a car that also has a VIN.

Another cool thing about a snowmobile tunnel is that you can use it to your advantage when you want to customize your sled. You can add many accessories or extra gear to the tunnel, depending on what you want or need on the trails.

Common additions to the tunnel include an extra seat or snow flaps. An additional seat will give another rider a more comfortable experience for long hauls, and a snow flap prevents snow from flying up behind the sled as you ride.

I’ve attached all sorts of stuff to my tunnel over the years. I often bring extra fuel and safety equipment for emergency purposes. You can get equipment specifically designed to attach to your tunnel or rig things up with your DIY skills.

You can also get a tunnel protector that helps the tunnel last longer. This is important for anyone who uses studded tracks. But it’s not essential at all if you use a regular track and don’t need the added protection.

Another cool way to customize your sled is to put a wrap on it. This involves sticking a custom piece of vinyl or other material on your machine, and the tunnel is the place where this sticks too. It’s a cheap way to give your sled a little added flair.

Here are a few quick answers to some of the most common questions relating to snowmobile tunnels.

Why do Snowmobiles have short tunnels?

The length of a snowmobile tunnel is usually based on the length of the track or chassis. So a shorter track machine will have a shorter tunnel. This smaller size can improve handling and make it easier to turn.

How do you clean and polish a snowmobile tunnel?

You can clean and polish a snowmobile tunnel similar to cleaning and polishing a car. Use a soap that is good for plastic or metal and any sort of buffing rag or sponge to polish it. Match your polish to the type of material the tunnel is made of.

Can you paint a snowmobile tunnel?

Yes, you can paint some snowmobile tunnels. Depending on what the material is made of, you can also replace the tunnel with a new one or place a vinyl coat on it to give you a different look.

How much does it cost to powder coat a snowmobile tunnel?

The average cost to powder coat a snowmobile tunnel is typically around $150-200. This depends on if you can do it yourself or need to take your sled to a powder coating shop.

How do you cut a snowmobile tunnel?

You can cut your snowmobile tunnel with a hacksaw, jigsaw, rotary saw, or any other type of blade that you can use safely. Just be sure to take your time and be careful.

How do you extend a snowmobile tunnel?

To extend the tunnel on your snowmobile, you’ll need to get or build some sort of extension. Some manufacturers offer these for sale, and you can attach the extension to your existing tunnel to make it longer.

The tunnel on a snowmobile serves a very important structural function that holds many components of the sled in place. It also allows you to add custom parts that can come in useful on the trail or give you a unique look.