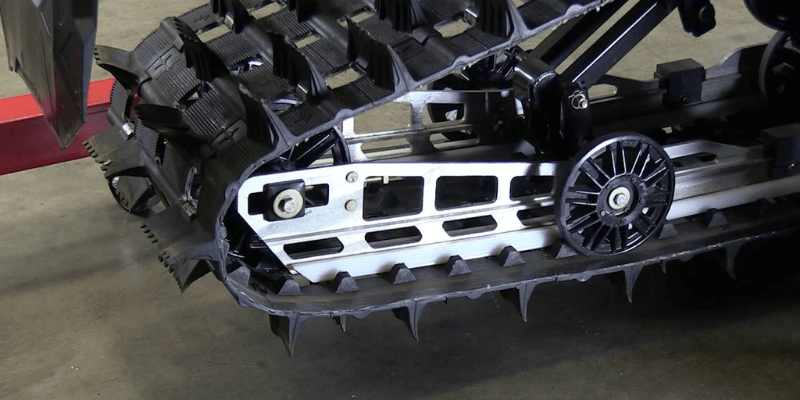 A hyfax on a snowmobile is a replaceable strip of plastic that attaches to the bottom of the rails on either side of the machine. It helps prevent the rails from wearing out through friction caused by contact with the track.

I’m a snowmobile enthusiast with decades of experience in the snow. I’m familiar with most of the parts on these machines and know and understand what a hyfax is. I’ve used and replaced many of these over the years.

In this post, I’ll give you a thorough explanation of what the hyfax is on your snowmobile. I’ll show you why these are important and their role in your sled’s performance and longevity.

Modern snowmobiles use a suspension system in the rear that involves the track sliding over the rails. As you can imagine, the constant movement of the track can cause a lot of wear and tear, which is why the hyfax was created.

The hyfax is a strip of strong and durable plastic that attaches to the bottom of these rails. It sits between the track and the rails, creating a layer of protection to prevent them from wearing down.

Since the rails are typically made of aluminum, they can wear out pretty quickly under the constant friction the track creates as the snowmobile is driven around in the snow. The hyfax fixes this issue by adding a layer of additional materials that wear out instead of the rails.

Technically a snowmobile doesn’t need a hyfax to operate. You can ride around without them, and you won’t notice any real difference in performance or feel. But as the rails wear down, this can start to cause issues.

The plastic that the hyfax is made of is a lot cheaper than the aluminum to replace, which is another advantage of having them on the rails. It is possible to replace the rails if they wear out without a hyfax, but the cost is much more than a new hyfax.

So, to sum it all up – the hyfax is two strips of hard plastic placed on the bottom of the rear suspension rails. These take away the burden of wear and tear, protecting the aluminum rails from damage and saving you money and hassle in the long run.

The standard hyfax on most snowmobiles will be made of ultra high molecular weight polyethylene. That’s a mouthful, and you’ll see this listed as UHMW plastic more often than the other way around.

This plastic is very durable without being too stiff. That makes it a good option to use for its intended purpose because it can take a lot of abuse without affecting the performance of the rear suspension.

There are a few different types of hyfax designs that you should know about. You can choose which option meets your needs or preferences on the trail, and you can customize your setup with any of them when desired.

The standard option made of UHMW plastic that I mentioned above is the most common and popular. They are also just called sliders or sometimes OEM hyfax. These will be the cheapest option you can find.

The most high-end hyfax is Teflon, and these will give you a longer lifespan and excellent friction reduction. Teflon hyfaxes have a design that includes a thin strip of Teflon in the middle of the plastic hyfax.

Blended hyfaxes are made out of a blend of several materials. This is typically a strong plastic and graphite. The graphite provides higher levels of friction reduction because it is more slippery than regular hyfax plastic.

The hyfax is an important piece of your snowmobile. But it’s also designed to wear out, and you’ll need to replace it from time to time. It’s not that complicated to do this, but you should keep an eye on them to make sure you replace them before they wear down your rails.

Nearly all hyfaxes will have a mark on them that shows you when it’s time for a replacement. When they wear down far enough, this mark will be exposed, and you’ll know it’s time to pop out the old ones and put a new set in.

Your hyfax will typically last anywhere from 1,000 to 3,000 miles of use, depending on how you ride and the conditions you are in most often. There are several factors at play here, and that’s why it’s good to check that indicator mark a few times during the season.

If you keep your track tension tight, the hyfax will wear out faster than if you always maintain proper tension. And if you ride on ice or thin snow conditions, this will also cause them to wear out quicker.

Replacing the hyfax is pretty easy, but you will need to loosen the track to make it happen. I typically replace my hyfax every season, even if they aren’t completely worn down. They are cheap, and it’s just part of my maintenance routine.

Here are a few of the most frequently asked questions about the hyfax on a snowmobile.

What is hyfax made of?

The hyfax is made of ultra-strong plastic that is resistant to wear and tear. Usually, this is a UHMW plastic which stands for ultra-high molecular weight.

How do I know if I have Hyfax on my snowmobile?

How do you know when Hyfax is worn out?

Most hyfax will have indicator marks that tell you when the plastic is worn down to when it needs to be replaced. You can shine a light into the rear of the sled to check on this, or slide the hyfax out and take a look to check for wear.

How long should Hyfax last?

Hyfax lifespan depends on the type of riding you do the most and the conditions you ride in, but they will typically last for several thousand miles. You might only get about 1500 miles if you ride in rough conditions.

Most snowmobile hyfax will be universal, meaning that you can buy any type of hyfax, and it will work on your machine. But there are several models that might need to be purchased directly from the manufacturer for the best fit.

The hyfax is a small but important piece of equipment on your snowmobile. It helps reduce the wear and tear on your track sliders and needs to be replaced every so often under regular use.

Remember to keep an eye on the indicator mark on your hyfax to help you know when it’s time to replace them. Or make it part of your seasonal maintenance and replace them every season.