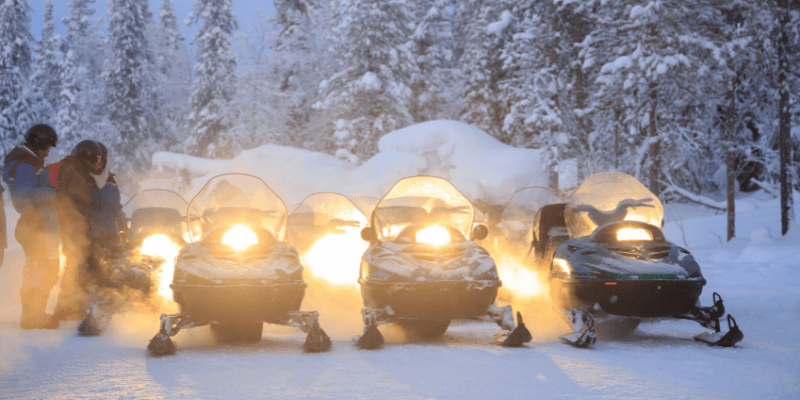 If you have spent considerable time around the world of snowmobiles, you have probably heard these machines called several different names.

There really isn’t a difference between snowmobiles and snow machines, and it just depends on where you live.

I’m Chaz, and I’ve been a snowmobile enthusiast for most of my life. I love everything about these machines, and I also know the different names that people call them in other regions of the world.

I’ve heard several different names for snowmobiles during my time as a rider. Snowmobile, snow machine, sled, Ski-Doo, skimobile, and ski scooter are some of the most common terms you’ll hear to describe the same thing.

You’ll hear these machines called different things based on where you are in the world, and I’m sure there are other names that I don’t know of and didn’t mention above.

Who Calls it a Snowmobile?

I grew up in Colorado, and I’m used to calling snowmobiles, well, snowmobiles. This is what everyone calls them where I grew up, and I might be biased, but I think this is the most commonly used term.

In most of the US, people call them snowmobiles. I’ve traveled all over the country, and this is what the machines are called the vast majority of the time. But many hardcore sledders will call them by multiple names.

Who Calls it a Snow Machine?

If you ever visit Alaska and say ‘snowmobile,’ the locals will know you are from somewhere else. Way up north, everyone calls snowmobiles snow machines. It’s just a regional difference that describes the same thing.

I don’t know why Alaskans call them snow machines, but they do. They will know what you are talking about if you say snowmobile, but they aren’t going to start calling them by any other name than snow machines any time soon.

There are other places I’ve been in Canada where people call them snow machines. I don’t know if this is specific to the region or just what is most commonly used.

If you are anywhere else in the world, you might hear them called a mix of these or any of the other potential names I listed above.

When a Snow Machine is Not a Snowmobile

I’d say that about 90% of the time, the terms snow machine and snowmobile are synonymous. But there are some situations where a snow machine is not a snowmobile.

A snowmobile will refer to the machine we are all familiar with. It has two skis up front, handlebars, a seat for riders, and a track that pushes it through the snow. You get the idea.

And while a snow machine almost always refers to this, it doesn’t always. There are snow machines that aren’t technically snowmobiles.

People will refer to any type of machine that is capable of moving across the snow as a snow machine. This is a more broad term than a snowmobile with that in mind. A snowcat, snow bike, or any other motorized thing designed for the snow can be a snow machine.

That might sound a little confusing, but it’s really not. If you ever get the chance to see a snow machine that isn’t a snowmobile, you are probably looking at something pretty cool that is worth exploring and understanding more in-depth.

So you can keep a basic rule in mind when you are talking about any motor vehicle that goes over the snow – a snowmobile is always a snowmobile, but a snow machine is a snowmobile and anything else that moves across the snow using a motor.

What Should You Call It?

The truth is, you can call a snowmobile whatever you’d like. As I said earlier, I grew up calling them snowmobiles, but now that I have traveled and heard them called other things, I also say snow machine and sled all of the time.

It’s a good idea to know and understand that these regional differences exist, but at the end of the day, no one cares that much what you call it. You might get a little flack for saying the non-regional version, but all riders tend to get along when the snow is good.

I think that the fact that snowmobiles are also called snow machines adds interest to the activity. I would never want to change these regional differences or expect everyone to call it what I call it. It’s quirky, but it’s something I really like about the world of snowsports.

Have you ever heard of a snowmobile called something other than a snowmobile or snow machine? I’d love to know, so tell me about it in the comments section below!