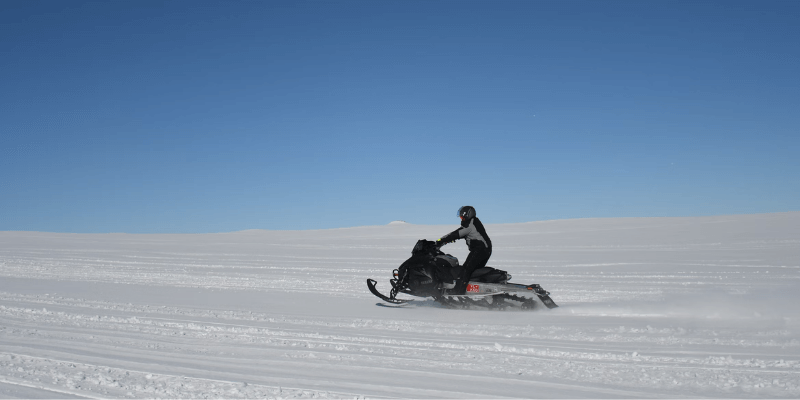 Turbochargers are a popular way to boost the power on snowmobiles and any other type of engine. This power boost occurs when a turbocharger forces more compressed air into the engine, allowing it to burn more gas and generate more power.

I’m an avid snowmobile enthusiast with years of experience on the trails and backcountry. I’ve learned a lot about turbochargers over the years by seeing them in action on various sleds that I’ve used or worked on.

This post will explain what a snowmobile turbocharger is and how it works to give your sled more power. I’ll provide you with a bit of history on this innovation and some tips on how you can turbo boost your machine.

Let’s fire up those engines and get after it.

What is a Turbocharger?

A turbocharger is an easy and effective way to generate more power from a snowmobile or any other engine. Turbochargers force compressed air into the engine to allow it to burn more fuel with every engine stroke.

These chargers are relatively simple in design and can help increase power without adding much weight. One drawback of larger engines in snowmobiles is the added weight that comes with them, and a turbocharger helps solve this issue.

This innovative system dates back to the early 1900s, when a Swiss engineer harnessed the power of exhaust to create a supercharged system. They have improved quite a bit since then, though the basic idea of how they operate is the same.

How Does a Turbocharger Work?

As I mentioned above, a turbocharger works by increasing the amount of airflow that gets into the engine, increasing the overall power output of the motor. But let’s take a closer look at how this happens.

On a basic level, a turbocharger is essentially an air pump that captures the air coming out of the exhaust system on a snowmobile and forces it back into the engine.

This system is made up of a few different parts that allow this recycled exhaust air to boost the engine.

A flange gets installed onto the manifold or exhaust pipe. Then you have an intake tube or hose and another hose that blows the captured air back into the engine. It’s a pretty ingenious design that can have impressive results on engine performance.

The engine boost occurs primarily when the snowmobile is running at higher speeds. You won’t feel it when going slow, but once you open up the throttle, the boost becomes apparent.

Benefits of a Turbocharger

There are several primary advantages of installing a turbocharger on your snowmobile.

The number one reason most riders want a turbocharged engine is to give them added power and speed without using a larger sled. The average range of power increase with a turbocharger can be up to 50% or more!

This increased power leads to faster acceleration and potential higher top speeds. If you like to push your machine to its limits, a turbocharger will help you get there.

Many riders like to keep their snowmobiles as light as possible. Added weight on a sled can be a downside for many reasons, even though larger sleds typically have more power and other features that can be useful.

A turbocharged engine will give you increased engine performance without adding much weight to the engine. The tradeoff is ideal in many situations, and keeping a lighter engine while adding power is pretty sweet.

Another benefit of a turbocharger is increased performance at higher elevations. Growing up in the Rockies, I know firsthand that your sled can struggle to get enough power when you’re high up in the backcountry.

There is less air and air pressure when riding at high elevations. This can reduce overall engine performance. By injecting more air into the system than what the engine would receive on its own, a turbocharger helps solve this issue.

A turbocharger will also reduce the noise put out by the exhaust system, resulting in quieter operating performance. You can use a smaller muffler when you have a turbocharger without worrying about making the machine louder.

Turbocharger systems can vary from pretty simple to complex. Depending on how much performance you want, you need to choose a system that will work well for your preferences.

Many modern high-end systems require the use of an intercooler, which cools the air coming out of the exhaust before it goes back into the engine. Hot air is not ideal for the engine, so these intercoolers are an important component of a turbocharged system.

Turbocharged snowmobiles can also require what’s called a wastegate. This part makes sure excess pressure doesn’t build up in the turbocharger when you lay off the throttle. This prevents damage and is included as part of the system.

A snowmobile turbocharger can be a great way to customize your sled and give you increased performance. But you always want to make sure you install all of the components correctly so they work right and don’t cause damage to your engine.

If you don’t know what you are doing or don’t feel comfortable trying this yourself, get the help of a professional mechanic.

Here are a few quick answers to some of the most common questions about snowmobiles turbochargers.

How much horsepower does a turbo add to a snowmobile?

You can easily increase power by about 30-50 percent on a snowmobile with a turbo. So if you have a 150hp machine, you can expect to get an increase of 50 to 75hp with the turbo.

Can you put a turbo on a 2 stroke snowmobile?

Turbocharging a 2 stroke snowmobile is less common than a 4 stroke because it’s more challenging to get things to work correctly. But it is possible. You just need to know what you are doing and keep several important factors in mind.

Does Polaris make a turbo snowmobile?

Yes, Polaris does make a turbo snowmobile. They have made several of them over the years, and the brand offers one of the only turbocharged 2-stroke models that is commercially available.

A snowmobile turbocharger is a system that harnesses the air from the exhaust and forces it back into the engine to increase power and performance. It’s a cool modification that can make your sled perform better without a considerable cost.