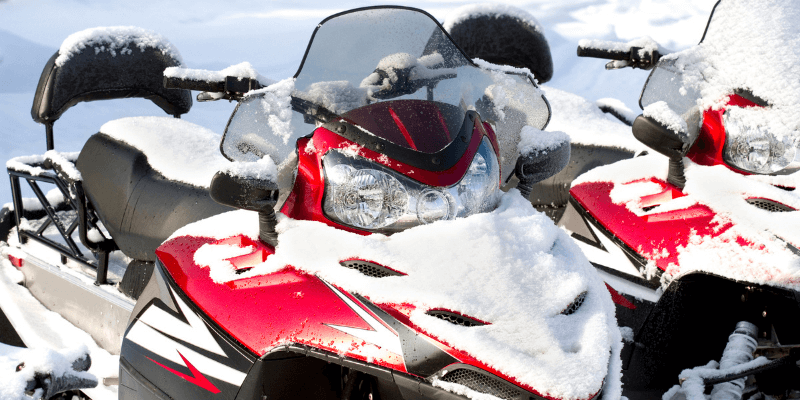 Another common debate between long-time riders is whether a fan cooled or liquid cooled snowmobile is better. There isn’t a correct answer to this question, and both styles of cooling can have their pros and cons.

I’m Chaz, a snowmobile enthusiast and the founder of this blog. I’ve spent time on many sled models over the years, and I have experience with both fan cooled and liquid cooled snowmobiles. I understand the differences between the two well.

This post will compare and contrast fan cooled versus liquid cooled snowmobiles. My goal is to give riders who don’t already know these differences a better understanding of how the cooling systems might affect performance and your experience in the snow.

Any type of engine, whether it’s inside of a snowmobile or any other machine, will have some sort of cooling system. This is important because if an engine gets too hot, it can stop working correctly and cause long-term damage.

Cooling systems are an integral aspect of snowmobile performance. Knowing the difference between the types of cooling systems can help you make an informed purchasing decision and get a sled that meets your needs or preferences.

Ok, let’s dive in and explore the differences between fan cooled and liquid cooled snowmobiles. Keep the following factors in mind when trying to decide which option to purchase.

One of the first things to consider when comparing the two types of cooling systems is cost. Fan cooled engines will be a lot cheaper than liquid cooled models. There are fewer components and parts, which helps keep the cost down.

But fan cooled options do have limitations that might outweigh their cheaper cost. So you can’t always make the pricetag your primary consideration when choosing. This cost difference can be relatively significant, so fan cooled options are a more budget-friendly option.

Liquid cooled snowmobiles will give you better performance in a lot of ways. If you want a larger engine size and the added speed, power, and torque that comes with it, you will want a liquid cooled engine.

Fan cooled engines are not really available in any size over 450cc, which is pretty small compared to most modern sleds. If you like going fast, you’ll want at least 600cc, and many riders say 800cc or more is ideal.

If you are a beginner rider or looking to get a snowmobile for a child, you might want a sled that isn’t as fast or powerful. In this situation, a fan cooled option would probably be best. It won’t go as fast and can be safer with that in mind.

Fan cooled snowmobiles are simpler engines with fewer parts, and they are also smaller. This means that there is less maintenance involved with owning a fan cooled sled than there will be with a liquid cooled one.

I wouldn’t say that either sled is more or less reliable – they both will give you lasting performance that you can count on if they are kept in good condition. But the fact that liquid cooled machines have more parts means more things can go wrong.

If the cooling system breaks on a fan cooled machine, all you really need to do is fix the fan or replace some of the parts that keep it operating. If a liquid cooling system fails, numerous issues can be causing it, which increases the cost of the fix and the time it takes to do it.

There are certain situations where a fan cooled snowmobile has the advantage over a liquid cooled one. Fan cooled machines don’t need snow on the engine to operate, which means they can work in warmer areas with less snow.

This also means they can go longer distances on ice or really packed snow without the chance of overheating.

Liquid cooled machines require snow to get thrown up into the engine to assist in the cooling process. They can overheat when used on ice or in warmer climates because of this, so the type of terrain and conditions you ride on should be a consideration.

5. Utility Use and Towing

If you need to carry heavy loads, you will want the extra power that a liquid-cooled machine will give you. They can be better suited to long cross-country supply runs in deeper snow or situations where you need to carry larger loads up steeper slopes.

Fan cooled sleds won’t have as much towing power, which means you won’t be able to haul as heavy of a load. But you will be able to carry a load over a longer distance on ice or packed snow. This means fan cooled sleds can be better for situations like ice fishing.

As you can see, there are some significant factors to keep in mind when deciding between a fan cooled snowmobile and a liquid cooled machine. They both have advantages and disadvantages in certain situations.

Liquid cooled machines are far more common these days, but you can still find fan cooled snowmobiles out there if that is what you are looking for. You might even want to have both kinds of sleds sitting around if you are a serious rider.