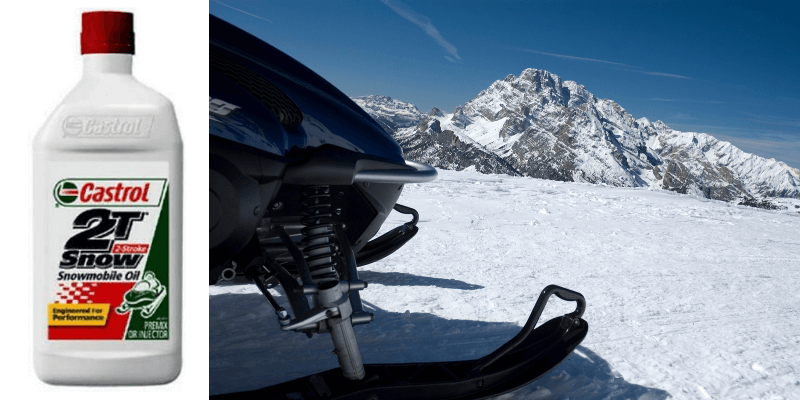 This oil works but it’s just not a top-performance option.

I’ve seen a few different machines cough out thicker than normal smoke when using this oil in my mix.

The oil does a solid job of lubrication and it works effectively in various temperatures.

Not a great value when you consider other oils on the market that are easier to find and more affordable.

This is my review of Castrol Snowmobile Oil.

I’m Chaz, a snowmobile enthusiast with decades of experience riding and repairing snowmobiles. I’ve used many oil brands in my machines over the years and have used Castrol 2T Snowmobile Oil.

Castrol 2T oil is a two-stroke engine oil that will work effectively for most 2-stroke sleds. It’s not my preferred oil to use, mainly because it tends to smoke, and I like a clean-burning option. I also think other oils perform better overall.

In this review, I’ll give you my take on using Castrol Snowmobile Oil. The brand of oil you choose to use in your machine is important, and I wouldn’t straight out recommend this option.

Castrol is a fairly well-known oil brand. They make a variety of oils for different engines and have a specific blend for two-stroke snowmobiles.

The Castrol 2T Snowmobile is the specific oil I’ll examine in this review, as it’s the only blend the brand makes that is dedicated to snowmobile performance.

This is a decent oil that will provide lubrication during the rigors of cold weather riding. It offers decent performance across the board but doesn’t excel in any category.

I like this oil because it works well at temperatures as low as minus 40C, which is essential for consistent performance during the heart of winter. But it tends to smoke quite a bit and is not a clean-burning option.

Overall, it’s an average oil that will get you by but won’t deliver high-end performance. I don’t personally use this oil, and I wouldn’t necessarily recommend it for use in your sled. It will work just fine, but I think there are better options out there.

Castrol Snowmobile Oil is an ok option if that’s what you have available or you have an older sled that tends to burn oil anyway. I wouldn’t recommend using it in newer machines very often.

This oil works; it’s just not a top-performance option. It is designed to be used with any two-stroke snowmobile, and it will provide ample lubrication and engine protection. It’s an average option but still gets the job done.

I like that it works well at lower temperatures. You can expect fluid performance at temperatures as low as minus 40C. That’s about as cold as you would ever want to ride in, and the oil holds up under the stresses caused by this temperature.

Castrol 2T is a smokey oil. I’ve seen a few different machines cough out thicker than normal smoke when using this oil in my mix. While I didn’t notice a considerable lack of performance because of this, I still don’t like when my sled is smoking when I’m on the throttle.

It’s just not a clean-burning option, in my experience. If you have any sort of environmental concerns or want a pristine environment, I’d avoid using it.

It is a high-detergent formula, so some smoke can be chalked up to cleaning the gunk out of the engine. But still, a lot of smoke is not something I like to see when I hit the ignition or gun the throttle.

The oil does a solid job of lubrication. It works effectively in various temperatures, and I think it provides quality performance in this category no matter how hard your ride. It does what oil is supposed to do – keep the engine lubricated and ready for action.

Castrol claims that the 2T oil offers effective lubrication for temperatures as low as minus 40C. I haven’t ridden in temperatures that cold using this oil, but I know a few other riders who use it, and they back the claim.

Castrol 2T Snowmobile oil isn’t as readily available as it used to be. If you can find it in stock at an auto parts store, it’s usually relatively affordable. But when ordering online, it can get more expensive than I think it’s worth.

This oil isn’t cheaper than other options that I think are of better quality. It’s not a great value when you consider other oils on the market that are easier to find and more affordable.

The oil gets an average rating here because it doesn’t provide high-end performance and costs about as much as high-end options.

If you want to explore other options (which I would recommend), there are a few other snowmobile oils that I like to use.

This is one of my favorite oils to use in any snowmobile. It has a long operating life, provides excellent lubrication, and is smoke-free. I also notice improved throttle response and a slight boost in RMPs when using TechniPlate.

I have a few friends who only use this oil and swear by it. It’s especially good for sleds that have power valves and will prevent sticking. This is a high-quality oil that will work in severe conditions and extremely cold temperatures.

I don’t recommend using Castrol Snowmobile Oil, mainly because of how much smoke I’ve seen occur when I’ve used it in my sleds.

This is an average oil at best. It will get you by and provide decent lubrication for a two-stroke sled, but I think there are better options out there.