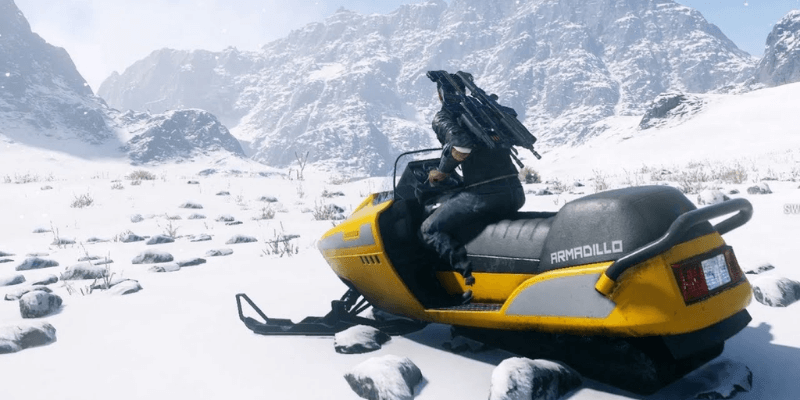 When you love snowmobiling but can’t get out in the snow, what’s one of the next best ways to satisfy that feeling? You fire up your console and dive into a snowmobile racing video game, of course.

I’m an avid snowmobiler who has been riding for decades. I love everything about these machines and get out on the trails as often as possible. But I also like a good snowmobile racing game and have played nearly all of them.

This post will list all of the best snowmobile racing video games. I’ll show you all the best games that have been released over the years so you have an idea of which you might be interested in to help keep your winter stoke alive when you’re stuck inside.

This is one of my favorite snowmobile racing games because it is flat-out fun. It’s available on several consoles, including Xbox 360, Wii, and Playstation 3. This is a very in-depth game that lets you explore many different snowmobiling styles.

It’s obviously a Ski-Doo-focused game, so all of the machines are that brand. This might seem a bit exclusive, but I promise you won’t be complaining when you hit the trails or compete against other riders in the same room or as part of the PlayStation Network or Xbox Live.

You can race head-to-head with multiple players or take on more challengers and compete in a larger race. There are also hill climbs and stunt modes that allow you to have a bit more fun than just racing.

This is another brand-specific snowmobile racing game, but it’s a ton of fun. It came out in 2007, so it is a little older, but I think it’s a classic and it still comes highly recommended. This one is available on Wii, Playstation 2, and Windows.

Once you fire the game up, you’ll have a choice between six different race tracks where you can compete head-to-head against other players or take on other challenges. There are also time trials and tournaments to vary up the racing vibe.

If you don’t want to race, there are also four stunt tracks where you can catch massive air and work your fingers into a sled maneuver frenzy.

This is another one of my favorite all-time snowmobile racing games, and it really captures the spirit of the rise of extreme sports that occurred right around the turn of the century in 2000. This one is exclusive to the original PlayStation but worth trying if you have one.

I like the different locations you can choose from within the gameplay. There are different snowmobile spots across the world that give you the experience of virtual travel, which is the next best thing if you’ve never ridden anywhere else.

This one also features a track editor where you can build your own race track or trail. It’s an awesome feature that leads to endless hours of fun. And the snowmobile experience seems pretty authentic, even for a 20+-year-old game.

Snow Moto Racing Freedom is another solid game that can be a lot of fun. It has an old-school vibe that older riders will love while still giving you solid gameplay and graphics that will appeal to the younger generation.

This game is available on Nintendo Switch currently, giving you the ability to play it just about anywhere you want to. You can choose between different types of races and styles and can also customize your snowmobile and rider.

After playing a while, you can unlock extra courses and machines, adding a bit of variety to the experience. You can also play with up to four players at a time, so it’s a great one to race against your friends.

This is another awesome snowmobile game that came out in the year 2000. It’s available for Nintendo 64, PlayStation, Game Boy Color, and Windows. It’s an action-packed game with several different racing courses that give you the feel of riding in different environments.

It’s not the most high-end game from a graphics perspective, but its simple design makes it easy to learn the controls and start having fun straight away. You don’t need to know anything about sleds to have a blast playing this game.

You can either play single-player or multi-player with this one, giving you the ability to race against other riders or just enjoy the courses on your own.

Arctic Thunder is one of my favorite snowmobile games for Xbox, and I’ve spent many hours playing this one when there isn’t any real snow to ride outside.

The game features many different courses where you can explore diverse terrain or race against other riders. You can also customize your rider and sled, giving the game a very hands-on experience that is a lot of fun.

Every character within the game has their own set of tricks, which gives you the chance to play around and pick a favorite. There are also many different locations to explore, which will certainly fuel future winter travel ideas.

None of us can snowmobile all of the time, and all of the games on this list make for solid alternatives when you need a taste of excitement but can’t get on the snow. If you haven’t tried them before, dive in and let me know what you think.