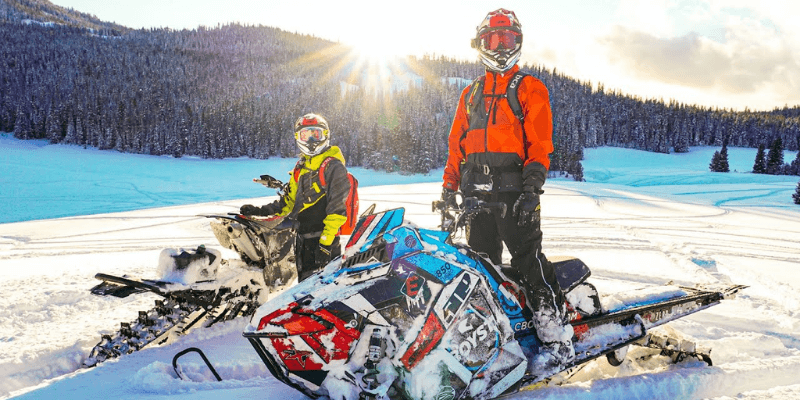 Before the snow starts falling in the winter, I like to get myself excited by watching a good snowmobile movie. There are a few cool films out there that are all about (or at least a bit about) snowmobiles, and if you like riding, you’ll like these movies.

I’m a lifelong snowmobiler, and I love everything about these incredible machines. I also like to keep my focus on snowmobiling year-round, which often means getting creative about it. Watching a snowmobile movie or two is an excellent way to do this.

This post will list some of the best snowmobile movies that have ever come out. Whether you want to fuel your stoke like me or are just in the mood for some easy entertainment, the films below are recommended.

Thunderstruck 7 is probably one of my all-time favorite snowmobile movies. It has the right vibe that gets me excited about going big in the backcountry or even just firing up my sled to hear it hum.

There are some amazing scenes in this one, including a climb up a chute that seems impossible. If you want to see some seriously skilled riders in action, this movie will provide you with just that and a whole lot more.

Boondockers 16 is a great snowmobile movie and one of the top releases from this nearly legendary snowmobile series. It’s from the 2018-2019 season and features amazing rides and terrain.

I like how this movie is shot, and it has a cinematic quality and great soundtrack that adds a lot to the already incredible riding. This is a good one to show someone who doesn’t know much about snowmobiling to see how awesome it is.

2SCS has been a solid snowmobile movie series for many years, and the 13th edition of it is one of my favorites. If you want a movie showing how wild and wacky riders can be while also crushing lines that leave most of us terrified, this is it.

This action-packed movie will get your adrenalin up even if you are wearing pajamas, and it’s full of great scenes and fun music.

509 Films Revolution is another great snowmobile movie that is really well produced and a lot of fun. This one breathes excitement and will give any rider the push to go big and get out in the snow as soon as possible.

Ok, I need to include a few Hollywood blockbusters on this list. They may not be entirely about snowmobiles, but everyone likes a good snowmobile chase scene, right?!

Die Hard 2 has one of my favorite snowmobile chase scenes, and it’s always fun to watch riders and stunt people take to the snow and push their skills to the limit for a wider commercial audience.

Inception is one of my favorite movies of all time. And it just so happens to include an awesome snowmobile and snow scene. I’ve had many snowmobile dreams over the years, and although none are quite like this – I hope to have this much subconscious action sometime soon.

If you’ve been watching snowmobile movies for a while, I’m sure you’ve seen one of the Slednecks films over the years. They are always entertaining and feature some of the most exciting lines you’ll see on screen.

Slednecks 17 is my favorite of the series, and it’s packed with great point-of-view shots and plenty of powder. If you want to see your favorite professional sledders in action, give this one a view.

Dan Davidoff was known as the Krazy Canadian, and this tribute by the folks who make the Thunderstruck films is a worthy homage to one of the wildest and rowdy snowmobilers you will ever see.

If you want to see a legend in action, give this one a shot. I promise you won’t be disappointed.

This one isn’t as well known as some of the other movies on the list, but it’s a fun film worth checking out. You’ll see some fantastic riders in action and learn a thing or two from some of the best that have done it recently.

Sledfarm Rising features some of the best Canadian snowmobilers going big and giving audiences all the excitement they can handle. If you are a fan of big mountain backcountry terrain, this one delivers.

All of the snowmobile movies are pretty sweet, and whether you are a serious rider or just want to learn, they will show you what’s possible on a sled. Give any or all of these your time, and you’ll be hoping for snow in no time.